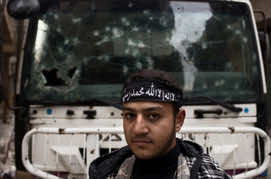 Jihadist networks recruiting Maghreb youth to fight in Syria and northern Mali have found a new front. They are now setting their sights on Algeria.

They were accused of recruiting Algerians to fight under the banner of Jabhat al-Nusra, which has recently declared allegiance to al-Qaeda in Iraq.

The leader of the AIS, the armed wing of the banned Islamic Salvation Front (FIS), was among the four. He is also suspected of establishing ties with jihadist groups in Libya and Tunisia, according to the Algerian daily.

“The networks which recruit Algerians, and Maghreb young people in general, use religious discourse and hadiths about the advantages of jihad in the Levant to convince young people to go to Syria,” commented Mohamed Saadi, a researcher in Islamic sciences.

The war in Syria has revived the sleeping cells that were organising the entry of jihadists to Iraq through Syria, he added. They now use almost the same networks and mediators to transport Algerians and Tunisians to Syria, taking advantage of decade-long relations.

For more than a year now, the Algerian security agencies have been cracking down on elements engaged in recruiting jihadists to Syria. Last year, security forces detained one person suspecting of transporting Algerians through Libya.

The security authorities compiled a list of 10 Algerians who travelled during that period to Syria through Turkey, and before it through Libya and Tunisia, El Khabar reported last July. They also received notifications about disappearance of 7 Algerians within two months.

“Networks recruiting jihadists for fighting in Syria are trying to bring in fighters who have military experience, including Algerians given the years of terrorism that Algeria has been through,” said Mohamed Smiem, an academic specialising in security affairs.

“These networks use religious discourse first and then financial incentives to bring in fighters to Syria,” he said.

While the number of Algerian fighters in Syria remains unknown, Lebanese daily Al Diyar alleged that there were about 10,000 Algerians fighting against Bashar al-Assad’s regime.

But Algerian observers doubt these numbers.

“It’s unlikely, if not impossible, that there are 10,000 Algerians in Syria. The number of Algerians there is much less,” Smiem said. He blamed some media outlets for “rushing to promote unfounded information” without verifying it.

Still, putting an end to recruiting cells for jihadists in Syria “requires co-ordination among security agencies in Algeria, Tunisia and Libya”, the analyst said.

According to the analyst, co-operation will help “identify the networks that recruit Maghreb young people and provide them with money and necessary documents to go to Syria”.