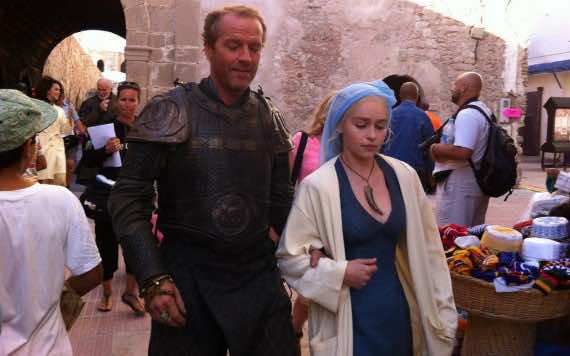 Morocco has become appealing for international film directors since the French film pioneer Louis Lumière. Many famous foreign films have been shot in Morocco. In 1955, Alfred Hitchcock directed The Man Who Knew Too Much shoes scenes took place in Marrakech and Casablanca.

Morocco’s reputation as a unique country with exotic natural scenes and unique cultural traditions attracted many international filmmakers to the extent that Morocco is branded by many as the Hollywood of Africa.The country is a favourite of many top film directors like Ridley Scott.

Many of the scenes in the epic fantasy drama television series Game of Thrones premiered in the the United States on March 31, 2013 on HBO were shot in Essaouira and Ouarzazate, Morocco.

Essaouira is situated about 500 km southwest of Casablanca along the Atlantic coastline, and the port city is enclosed by 18th century fortified walls.The historical coastal town of Essaouira was chosen to continue the adventures of Daenerys Targaryen in the city of Astapor.

Ouarzazate, also known as the gateway to the desert, is 500 km east of Essaouira and is also home of Atlas Studios, the headquarters of one of the world’s largest movie studios.

Tourism practitioners in Morocco say that such films boost tourism in the country. Since the first episode of this season of “Game of Thrones,” the epic fantasy series followed by many fans around the world, the number of hotel reservations in and around Ouarzazate have reportedly increased 100 per cent.