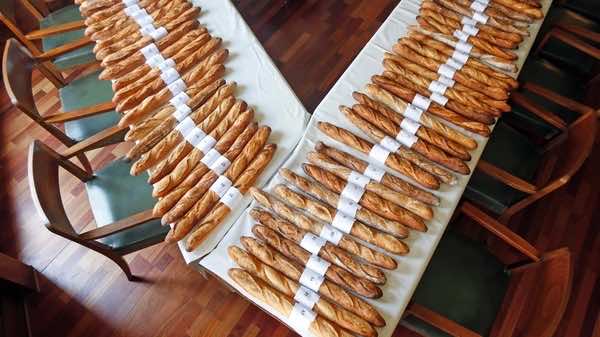 If you want the best baguette in Paris, go see Ridha Khadher. The 42-year-old baker has been turning out the long, golden rods of bread since he was 15, and has just been awarded the Grand Prix for his labor.

Khadher, born in Tunisia, said on Friday that he had decided at the last minute to enter the annual competition for the best traditional baguette in the city.

Besides the acclaim, and likely extra business, the winner gets to deliver his baguettes to the French presidential palace for a year.

His secret is not the ingredients, because they don’t change, he said.

“The secret is hard work,” he said. An excellent baguette depends on how the dough is kneaded, how long it rests, and how it is shaped, he said.

His traditional baguettes are nearly 24 hours in the making, compared to five hours for ordinary baguettes. Khadher and his crew turn out 800 to 1,000 baguettes a day in the basement furnaces of his Left Bank shop, Au Paradis du Gourmand.

The line was long on Friday as faithful clients and the curious lined up. David Elbaz, one long-time client, praised the baguette as “crunchy and magnificent.”

Khadher came to France at the age of 15 and quickly entered the bakery business with his brother, becoming an artist of the most French of symbols.

“Of course, I’m happy,” said. President Francois “Hollande is going to be eating our baguettes along with all his ministers, and I’m hoping that they will be satisfied and happy.”