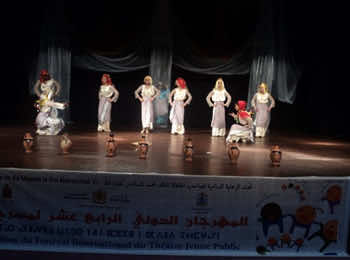 Under the high patronage of King Mohammed VI, the events of the fourteenth edition of the International Festival of Children’s Theatre opened on Thursday in Taza. The festival takes place from 25 to 27 April with the participation of local, national and international theater groups. The opening ceremony was attended by the mayor of the province of Taza and a number of military, political and civil figures in the province.

In his speech to the audience of the festival, Mr. Abdul Haq Effendi, Director of Arts in the Ministry of Culture, spoke on behalf of the Minister of Culture Mr. Mohammed Amin Subaihi and said that the International Festival of Children’s Theatre of Taza has become “a cultural digit firmly engraved in the memory of intellectuals and children,” pointing out that the festival has made the city a cultural hub in the region and is a locomotive for cultural development. He also praised the role of all stakeholders who work for the success of all the editions of the festival.

In his turn, Mr. Hamid Couscous, who spoke on behalf of the Urban Community of Taza, pointed to the role the festival has got to play with the succession of its editions to become a focus of national and international cultural radiation. He also called for further joint work between the city council and the Ministry of Culture to bring the rest of the city’s cultural projects into existence, which will expedite the recognition of the Old Medina of Taza a as national heritage site.

In his speech, Mr. Khalid Senhadji, president of the Friends of Taza Association, asserted that the International Festival of Children’s Theatre has made important strides for the consolidation of a conscious culture of theatre with the conditions of theatrical creativity specialized in childhood and children’s issues. He also focused on the added value that “Taza Award for literary creativity,” plays in this regard, and praised civil society actors for their contribution to the success of the festival through the parallel activities they organize.

The Regional Director of the Ministry of Culture in Taza-Al Hoceima-Taounate Mr. Hassan Hernan noted  that the festival has become an international cultural event and an opportunity for networking and exchange of experiences and expertise between the interested parties and specialists in the art of children’s theatre, noting that this edition saw the inauguration of a great cultural and artistic edifice which is the new theatre of Taza, an institution that will definitely strengthen the cultural infrastructure of the region. This edition, he noted, was also marked by a series of developments at the level of participation and parallel activities.

It is worth mentioning that the 14th edition of the International Festival of Children’s Theatre is organized by the Regional Directorate of the Taza-Al Hoceima-Guercif -Taounate region, in partnership with the Urban Council of Taza and in collaboration with the Friends of Taza Associatio.

It is worth mentioning that the 14th edition of the International Festival of Children’s Theatre – which is organized by the Regional Directorate of the Taza, Al Hoceima, Guercif, Taounate region in partnership with the Urban Council of Taza and in collaboration with the Friends of Taza Association and Mirrors Publications – has opened its parallel program by providing several theatre shows not only in the city of Taza but also in the surrounding villages.