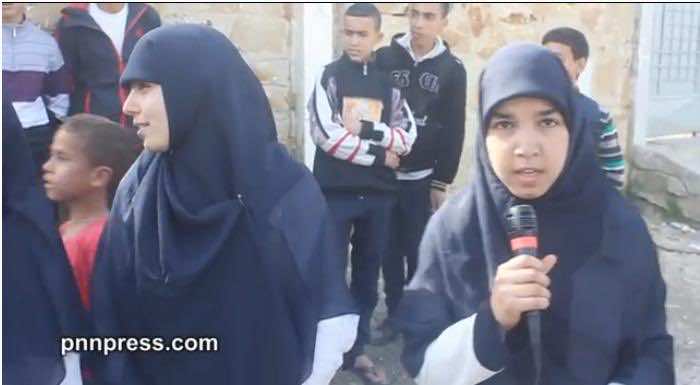 In an unprecedented move in Morocco, the headmaster of Ibn Sinaa middle school in Tangiers, has allegedly sent several schoolgirls out of school for the simple reason that they were wearing a headscarf.

The incident, which instantly sparked much uproar, pushed many associations to condemn the headmaster’s alleged intolerant act.

In a video posted on YouTube following the incident, the veiled school girls vented their anger, alleging that they “were banned from entering school by their headmaster because of their headscarf”.

“We have not entered school for six days now,” the schoolgirls added.

Taken aback by the news, many Moroccan shared the news on Facebook and expressed their condemnation of the headmaster’s alleged move towards these young  schoolgirls.

While the headmaster has not yet disclosed any motive behind denying the girls their right to enter school, many Moroccan Facebookers agree that there is no excuse that can justify the act, particularly that wearing the veil is part of Islam, the official religion of Morocco.

“The reasons behind this do not seem to be logical”, Baba Louay, a blogger from Rabat, told Morocco World News.

“Why did he ban them now and not before,” he wondered.

The schoolgirls called on the Ministry of Education and other associations to defend their inalienable right to wear the headscarf and to be allowed access to school.