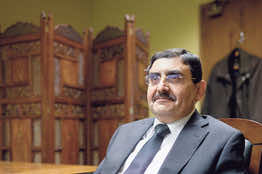 Senior Egyptian officials visited Iran on Saturday to further a proposal by Cairo for an Islamic quartet that would help to resolve the Syrian conflict, the presidency said.

The Egyptian delegation’s visit to Tehran comes amid a faltering rapprochement with Iran, after decades of severed diplomatic ties.

The two countries signed a memorandum of understanding in March to promote tourism, but Egypt then closed the door to Iranian tourists following objections by ultra-conservative Islamists.

The two nations severed ties after the 1979 Islamic revolution brought to power a theocratic government in Tehran that opposed Egypt’s peace treaty with Israel.