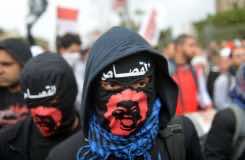 Egyptian police arrested 12 members of the “Black Bloc” — a violent group opposed to the Muslim Brotherhood — after clashes outside Cairo’s presidential palace, the official MENA news agency said on Saturday.

Protesters hurled rocks and fire bombs at the walls of the presidential palace in Heliopolis, and torched a police vehicle, a security source told MENA.

“Security forces arrested 12 youths who were among rioters involved in the events around the presidential palace on Friday,” the source said, adding the judiciary would take action against those involved.

Footage broadcast on private television station ONTV showed a police vehicle ablaze on the edges of the presidential palace compound.

State television reported early Saturday that “clashes between the police and the Black Bloc at the presidential palace wounded 20 people.”

A security official told AFP that three security personnel, including two officers, were among those hurt.

The state prosecutor Taalat Abdallah had ordered the arrest of 22 alleged members of the group last week. He had accused the group of “terrorism” three months ago.

Demonstrators, hooded and masked and dressed in black from head to toe, appeared in January in Cairo and other provinces, calling themselves the Black Bloc.

They present themselves as the defenders of protesters opposed to Islamist President Mohamed Morsi’s rule.

On their Facebook page, the activists say they are a “generation born of the blood of the martyrs” from the 2011 revolution that toppled former president Hosni Mubarak.

For the past five months, Egypt has been suffering a grave political crisis, marked by deadly clashes between supporters and opponents of Morsi.

The palace in Heliopolis has already been the scene of similar violence, notably in December, when around 10 pro- and anti-Morsi demonstrators died in clashes.