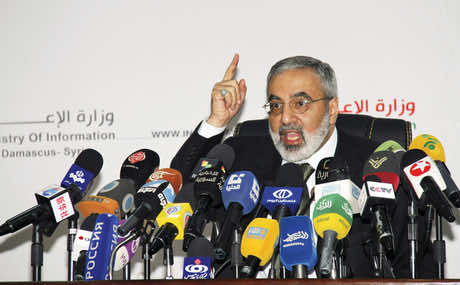 Syria dismissed as a “barefaced lie” on Saturday American and British claims it may have used chemical arms, as staunch ally Russia warned against using such fears to intervene militarily in the strife-torn country.

“First of all, I want to confirm that statements by the US secretary of state and British government are inconsistent with reality and a barefaced lie,” Syrian Information Minister Omran al-Zohbi said in an interview published on the Kremlin-funded Russia Today’s website.

“I want to stress one more time that Syria would never use it — not only because of its adherence to the international law and rules of leading war, but because of humanitarian and moral issues,” Zohbi said.

UN chief Ban Ki-moon has called on Damascus to approve a UN mission of inspectors to probe the alleged use of chemical weapons in the spiralling conflict that erupted in March 2011.

But Zohbi told Russia Today that Syria could not trust UN inspectors from Britain and the United States.

“We also do not trust their qualifications. Their aim is to juggle with facts,” he said, adding that Syria would accept Russian inspectors.

“We won’t mind if Russians would be among the experts; quite the contrary, we only welcome this idea. We are quite sure in their high qualification and ability to clearly see into such matters,” he was quoted as saying.

US President Barack Obama warned Syria on Friday that using chemical weapons would be a “game changer”, after the US, Israel and Britain cited signs that Assad’s regime has used the deadly agent sarin.

But Obama said Washington must act prudently and establish exactly if, how and when such arms may have been used, promising a “vigorous” US and international probe into the latest reports.

Russia warned against using these reports for military intervention.

“We must check the information immediately and in conformity with international criteria, and not use it to achieve other objectives. It must not be a pretext for an intervention in Syria,” deputy foreign minister and Middle East envoy Mikhail Bogdanov said in Beirut.

Zohbi linked the chemical arms accusations to what he said was the recent military success of regime forces.

“I want to give you joy: there are qualitative changes on the battlefields. The uproar from the Americans that has arisen in the last 48 hours is due to this,” he was quoted as saying by the RIA Novosti news agency.

Zohbi on Friday said at a news conference in comments published by the Interfax news agency that chemical weapons were used by rebels and originated in Turkey.

The Syrian opposition has stepped up pressure by urging the UN Security Council to take immediate steps, possibly even by imposing a no-fly zone on Syria.

And British Prime Minister David Cameron said the growing evidence that Assad had turned chemical agents on his own people was “extremely serious”.

Fighting continued unabated on Saturday, with at least 10 people killed in shelling on Douma northeast of Damascus, the Syrian Observatory for Human Rights said.

On Friday, at least 127 people were killed across the country, it said.  Analysts said Syria’s neighbours face a growing risk of the conflict spilling across their region as Assad turns to ever more desperate acts to halt rebels.

They said Lebanon and Jordan will be the most vulnerable if the conflict spreads, while Iraq will also be affected along with Israel and Turkey.

“It is a very vulnerable region and there is a risk of escalation,” said Anthony Skinner of British risk consultancy Maplecroft.

Iraqi Prime Minister Nuri al-Maliki alluded to Syria on Saturday, saying sectarian strife growing in his own country “came back to Iraq because it began in another place in this region.”

Senior Egyptian officials, meanwhile, visited Iran on Saturday to further a proposal by Cairo for an Islamic quartet of Egypt, Turkey, Saudi Arabia and Iran that would help to resolve the Syrian conflict, the Egyptian presidency said.