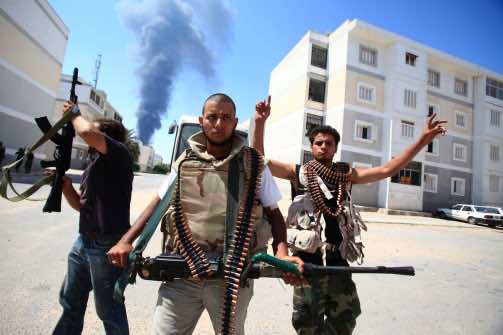 Gunmen surrounded Libya’s foreign ministry on Sunday demanding it be “cleansed of agents” and ambassadors of ousted
dictator Moamer Kadhafi, an official said.

The group prevented staff from entering the building in Tripoli, said the ministry official who spoke to AFP on condition of anonymity.

Around 30 vehicles, some mounted with anti-aircraft guns, and dozens of armed men surrounded the office, an AFP photographer at the scene reported.

The official criticised the group’s “extremely offensive” behaviour, even if their demands were “legitimate”, saying this did not justify “paralysing the whole work of a ministry”.

The proposed law could affect several senior figures in the government, and has caused waves in the country’s political class.

In March, demonstrators encircled the assembly, trapping members in the building for several hours as they called for the adoption of the law.

After the siege was lifted, gunmen targeted Congress chief Mohammed Megaryef’s motorcade without causing any casualties.

Libya’s government is struggling to assert its influence across the country, where Megaryef’s militias who fought Kadhafi in the 2011 uprising still countrol much territory.