Morocco World News
Home US News ‘I’m not the strapping Muslim socialist I used to be,’ banters Obama 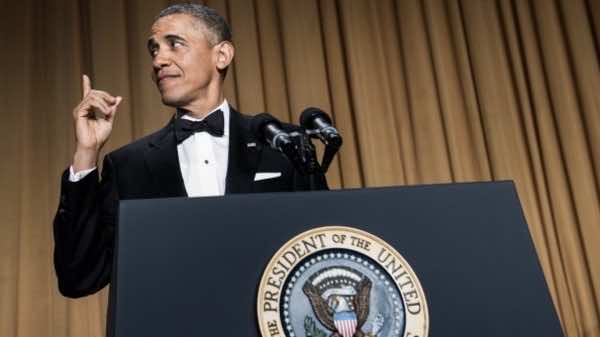 While he isn’t the “young Muslim socialist” he used to be, U.S. President Barack Obama can certainly perk up a crowd.

Obama drew laughs during his 2013 White House Correspondents’ Dinner speech as took a swipe at conspiracists who have doubted his religion, while also making light of his graying hair.

“These days, I look in the mirror and I have to admit, I’m not the strapping young Muslim socialist that I used to be,” Obama said. “Time passes. You get a little gray.”

The president is a Christian who was born in Hawaii, but he included some material for so-called “birthers” who falsely assert he was born abroad.

“I’m also hard at work on plans for the Obama Library, and some have suggested that we put it in my birthplace, but I’d rather keep it in the United States,” he said.

Entering to the rap track “All I Do Is Win” by DJ Khaled, Obama joked about how re-election would allow him to unleash a radical agenda. But then he showed a picture of himself golfing on a mock magazine cover of “Senior Leisure.”

Large chunks of Americans have previously incorrectly identified the Obama a Muslim, The Huffington Post reported citing a May PPP survey. It found that 52 percent of 656 likely GOP primary voters classified the president under that religion.

Obama has also been referred to as a socialist by conservative observers.

“Earlier in December, televangelist Pat Robertson accused Obama of not admitting to his “socialist” ways that is destroying free enterprise in America,” reported the Post

While former vice presidential nominee Sarah Palin has also previously used the same term, warning that America’s debt is putting the country on a path to communism.