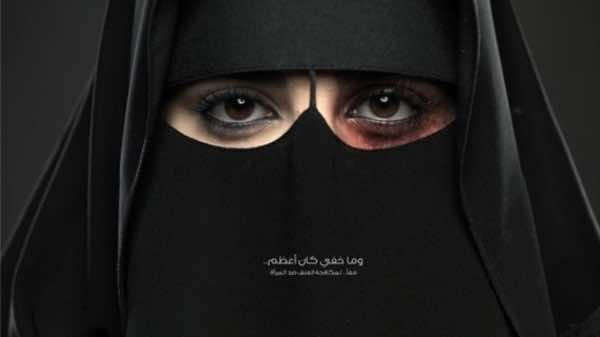 An image of a burqa-clad woman with a blackened and bloodshot eye, part of a campaign backed by the King Khalid Charitable Foundation, has sparked international media attention.

The campaign will to provide “legal protection for women and children from abuse in Saudi Arabia,” says behind the campaign.

“The phenomenon of battered women in Saudi Arabia is much greater than apparent,” the foundation wrote in literature for its campaign.

The King Khalid Foundation was established in 2001 by the family of the late King Khalid, who ruled from 1975 in Saudi Arabia until his death in 1982.

Saudis are being encouraged by the campaign to report cases of violence at locations around the Kingdom including Madinah, Najran, Makkah and Riyadh, reported The Huffington Post.

One in every six women is abused verbally, physically or emotionally every day, and 90 percent of the abusers are usually husbands or fathers, said Saudi columnist Samar Fatany, citing studies.

“According to research conducted by the National Family Safety Program, most women are not aware of their rights and some men violate religious teachings and follow aberrant customs and traditions,” Fatany added.

In 2011, women were given the right to vote and run for office in municipal elections in 2015. Earlier this year, members of country’s legislative Shura Council included 30 women.

It was also recently announced that women would be allowed to practice law in a professional environment.

Saudi women are not allowed to drive, take up employment or leave the country without a male guardian’s permission.

In 2011, an SMS system to track women was reported, allowing Saudi authorities to inform male guardians of their whereabouts.