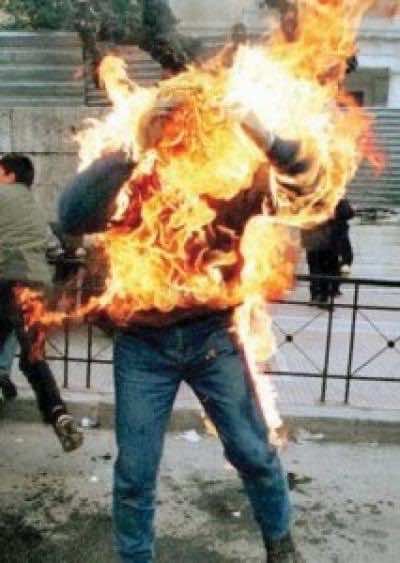 A young jobless man set himself ablaze and was seriously wounded on Sunday in front of the town hall of Sidi Bouzid, birthplace of Tunisia’s 2011 revolution, witnesses said.

Brahim Slimani, 23, doused himself with petrol and set himself alight in front of the closed town hall, to the alarm of passers-by who rushed to his rescue.

He was taken to the local hospital where doctors said he had third degree burns over three-quarters of his body.

Witnesses said the man did not utter a word before his action but a friend told AFP that he was unemployed and living in poverty.

The number of people committing suicide or trying to take their own lives has multiplied since a young Tunisian street vendor set himself on fire on December 17, 2010, in a drastic act of protest against police harassment.

Limited economic prospects, especially in the neglected interior, were key factors behind Tunisia’s revolution. Two years on, nearly a quarter of the population lives in poverty, with unemployment at around 18 percent.