Chicken has been for so long the luxurious dish one can serve for special guests. 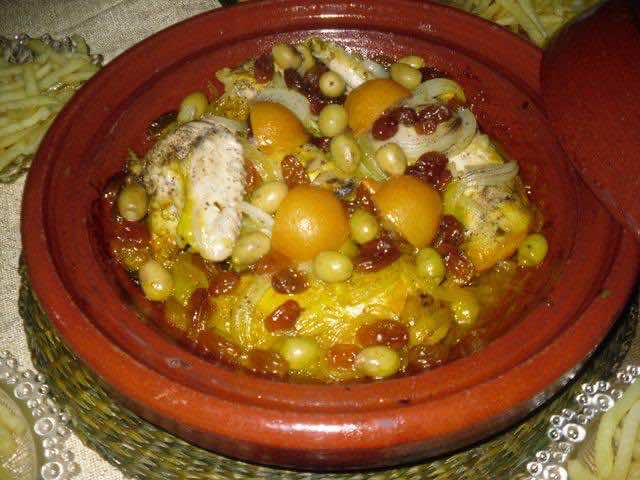 Taroudant – Chicken Tagine is very famous in Moroccan cuisine. Families prepare it more often because chicken is cheaper and it is easy Moroccan Recipe.

Before the wide spread of modern butchers who now provide people with all the kinds of meat any time of the day, it was not that easy to get meat every day.

People then, used to raise animals especially poultry to meet their needs of meat at any time.

Nowadays, as chicken becomes widespread and cheaper it has become an essential element in the Moroccan cuisine.

Moroccan families use it to prepare different kinds of food. Since tagine is the most famous daily dish for nearly all Moroccans, they usually, for the sake of diversity, switch to chicken to prepare their most cherished dish, Tagine.

However, most families tend to make the chicken tagine very light; in other ways, they use only few vegetables.

Unlike the normal well known Moroccan tagine with several vegetables, the chicken tagine is made only with onions, raisins and pickled lemon with some olives for decoration and extra exotic flavor. This recipe will take you through very simple steps to prepare easily your own tagine quickly.

1 whole chicken cut into 8 pieces cleaned and soaked in salty water with some vinegar.

How to prepare Chicken Tagine?

Serve hot with bread and some salads!