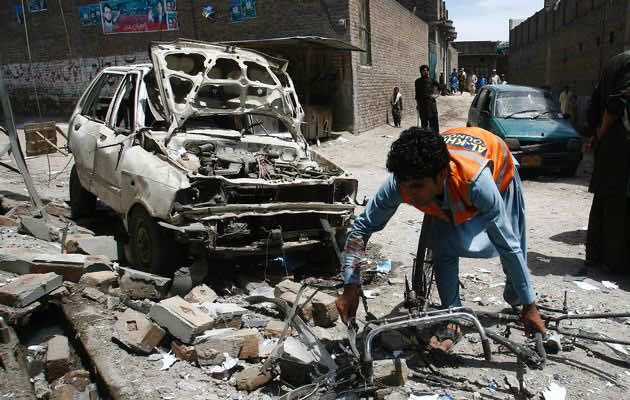 Three Taliban bomb attacks targeting election offices and a candidate in Pakistan on Sunday killed at least nine people, officials said, the latest bloodshed ahead of polls next month.

Violence has marred the campaign for the landmark May 11 general election, with more than 50 people dead in blasts and suicide attacks since April 11, according to an AFP tally, including more than 20 in the past three days.

Five people died and 22 were wounded on Sunday in a blast at the office of an independent candidate in the northwestern garrison city of Kohat, adjacent to Pakistan’s restive tribal areas along the Afghan border.

A blast at the offices of another independent candidate in Peshawar, the main city of the northwest, killed three people and wounded 13, officials said.

The Kohat blast occurred at the campaign office of Noor Akbar Khan, who is running in the Orakzai tribal district. He is canvassing for votes among the numerous Orakzai residents forced to flee the district to Kohat by army operations against militants.

“The IED was planted outside the election office. At least five people have been killed and 22 injured,” city police chief Dilawar Khan Bangash told AFP.

Fazal Naeem, a police spokesman in Kohat, confirmed the attack and told AFP the explosion had damaged shops and vehicles nearby and also hit an office of the Awami National Party (ANP), which has been targeted repeatedly by the Taliban.

“The election office was open at the time and supporters of Noor Akbar Khan were sitting inside. The death toll may rise, the condition of some of the injured is critical,” Tanveer Khan, another police official, told AFP.

Nasir Khan Afridi, the independent candidate whose office was hit in Peshawar, is running for a seat in Khyber tribal district and like Khan, has been campaigning among voters displaced by a military offensive.

The third bomb, planted on a roadside killed a seven-year-old boy and injured 16 others in northwestern Swabi district when Ameer Rehman, exploded as an Awami National Party (ANP) candidate drove past in a convoy of dozens of vehicles after addressing a rally.

The Tehreek-e-Taliban Pakistan (TTP) group claimed responsibility for Sunday’s blasts, as well as attacks in Karachi in recent days.

On Saturday three blasts in Karachi, Pakistan’s biggest city and commercial heart, left at least three people dead and 49 wounded, while on Friday a car bomb at an ANP meeting killed 10.

Two of Saturday’s bombs hit the offices of the Muttahida Qaumi Movement (MQM) and the Pakistan People’s Party (PPP), which along with the ANP were coalition partners in the outgoing national government, led by the PPP.

Fear of attacks has meant there have been few large-scale political rallies so far, leading to a lacklustre election campaign.

The TTP said it was attacking political parties because of their “secular doctrine” and because they were behind military operations in the tribal regions.

A statement from TTP spokesman Ehsanullah Ehsan explained the militants’ stance with reference to European philosophers.

“Islamic laws and values are from Allah and secular doctrine is from Rousseau, Kant and Bentham,” the statement said.

“We cannot prefer human beings on our Lord the merciful and mighty. A man cannot be secular and Muslim at a time. These are two different doctrines in nature.”

Amnesty International has called on Pakistan to investigate the recent wave of attacks and ensure adequate protection for election candidates.

May 11 national polls should see power pass from a civilian government that has served a full term to another through the ballot box for the first time in the nuclear-armed country’s turbulent history.