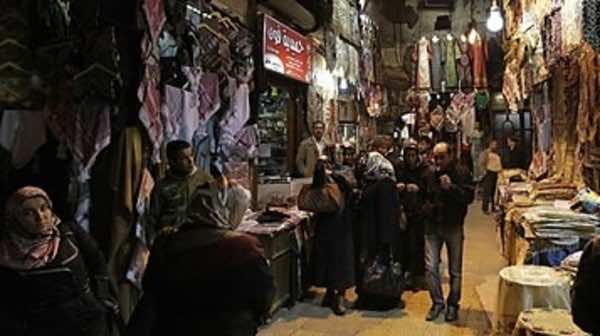 Bassel Khalil fled the devastating conflict in Syria with only $400 in his pocket and, together with his family, found refuge in Cairo’s “Little Damascus” where he scrapes a living giving guitar lessons.

Khalil lives with his lawyer friend Ammar, another Syrian, in an apartment in 6th of October city on the outskirts of Cairo.

They are among hundreds of thousands forced out of their country by war.

“We do not want to make a life here, but there is no other choice,” Khalil told AFP.

The sprawling new development in the desert west of Cairo has become a hub for Syrian refugees, but its long parallel avenues lined with residential blocks are a far cry from the narrow streets and bustling markets of old Damascus.

Khalil and Ammar are middle class, and were able to afford the trip to Cairo. In contrast, many of their compatriots have only managed to make it to Lebanon next door, or to refugee camps in neighbouring Jordan and Turkey.

In Cairo, the new arrivals have carved out a “Little Syria” for themselves, where flags of the Free Syrian Army flutter in the cement landscape, and shops brimming with shawerma kebab spits and pastries are frequented by patrons with Syrian accents.

“6th of October has became a Little Syria,” said Sima Diab, the coordinator of several projects that offer assistance to Syrian refugees.

“There are tens of thousands here. But there is no work for lawyers or doctors, most jobs are in catering,” she said.

In February, Egypt’s interior ministry spoke of nearly 140,000 Syrian refugees in the country. The UN High Commissioner for Refugees said it had registered 38,000 Syrians in Egypt, but with thousands of files still being processed.

“They were 1,000 in August 2012, 13,000 in December and nearly 50,000 today,” said Mohamed Dayri, regional representative for UNHCR, which recently opened a new centre in the heart of Cairo dedicated to registering arrivals.

The number remains relatively small compared to the influx of Syrians into Lebanon, Turkey and Jordan, estimated by the UNHCR last week to total 1.4 million, a figure that increases by 200,000 every month.

In two years, the war between the rebels and forces loyal to President Bashar al-Assad has killed more than 70,000 according to the United Nations, and four million people have been internally displaced.

Bilal, who owns a small restaurant in 6th of October, came to Egypt in 2004 after leaving Syria for better work abroad.

At the time, “there were no Syrians here, but life has changed with the revolution,” he told AFP.

Originally from Homs, a city divided between rebels and regime forces, Bilal had the money to help his family leave the war-ravaged city seven months ago.
— Egyptians upset with Syrians —
———————————-

“The Egyptians are upset with the Syrians. For the past two years, prices have increased and the Syrians are taking up the jobs,’ he said.

When he arrived, a family apartment in 6th of October cost about 1,000 Egyptian pounds (around $150) a month. But now, prices have risen threefold, as Egypt struggles with its own economic crisis and inflation.

A couple of blocks away, a 16-year-old refugee — who refused to give her name — lives with her mother and brother on the ground floor of a small building.

The three, Christians from the coastal city of Latakia, fled the conflict overnight six months ago, leaving behind the rest of the family.

The daughter, a young artist, had broadcast anti-regime songs on the YouTube social networking site. But since her arrival she has juggled working in a supermarket and singing at parties.

“I hate living here, It’s been hell for six months, but I’m still alive!” she said from their flat where some of the furniture is still wrapped up.

She says he was sexually harassed twice.  “I do not want to stay here. Now when I go out, I put on a hijab (Islamic headscarf), to protect me, and my mother wants me to carry a knife.”

She wants to go to Norway, illegally if she has to, to study music. But for now, she has to wait.

“All the money has been put into our tickets for Egypt, so I’m saving,” she said.