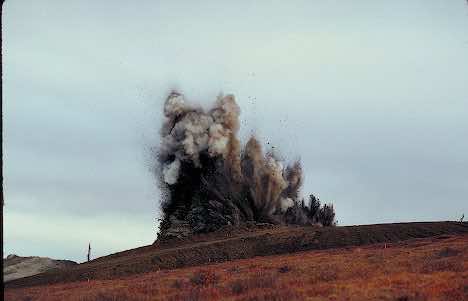 A land mine explosion seriously wounded two members of Tunisia’s national guard on Monday as they pursued a group of armed Islamists near the Algerian border, the interior minister said.

The men were “seriously wounded by the explosion of a mine while they were conducting a search operation at Mount Chaambi targeting terrorist elements on the run,” the ministry said, referring to Islamist militants.

It said one of the victims lost a leg and that the other was seriously wounded in the eyes.

It did not say whether the mine was laid by those being pursued in the operation, or if it was a part of the security infrastructure along Tunisia’s long and porous western border with Algeria, where arms trafficking is common.

Later on Monday, after security reinforcements had been sent to the region, a third soldier also had his leg blown off when a second land mine detonated, a security official told AFP. The report could not verified independently.

“According to preliminary reports, the mines were laid by the (fugitive) group,” which is thought to be hiding in the mountainous region, the security official said.

A gunfight that took place earlier in the day had complicated the evacuation of the two guards who were finally taken to hospital in the region capital Kasserine where they were operated on, medical and security sources said.

The inaccessible Mount Chaambi region has been repeatedly targeted in search operations by the security forces since last December when a policeman was killed in clashes with gunmen in the area.

Shortly afterwards, the authorities claimed to have broken up an Al-Qaeda recruitment cell and arrested 16 suspected members.

Since the revolution in January 2011 that ousted veteran strongman Zine El Abidine Ben Ali, Tunisia has witnessed a wave of sometimes deadly unrest blamed by the authorities on hardline Islamists, who were repressed under the former president.