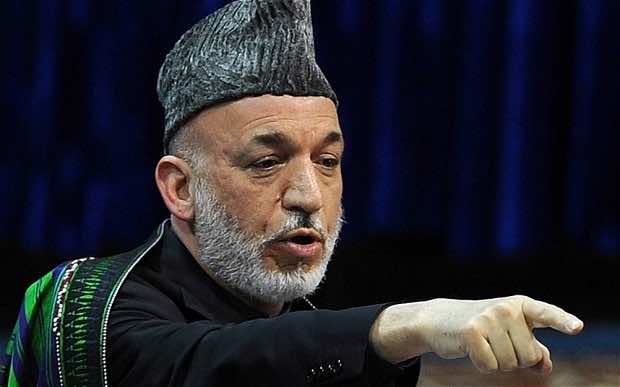 Afghan President Hamid Karzai confirmed Monday that his office has received money from the US Central Intelligence Agency over the past decade, with wads of cash reportedly handed over in suitcases and backpacks.

Karzai thanked the US spy agency for what he said was money well spent just hours after The New York Times reported that Karzai’s office received tens of millions of dollars in cash in a CIA effort to win influence.

“Yes, the NSC of Afghanistan has received money from CIA in the past 10 years. The amount was not big, rather it was small,” Karzai said in a statement, referring to the National Security Council which is part of his office.

Karzai said the money had been used for good causes in Afghanistan, where endemic corruption has undermined efforts to establish a stable state, more than 11 years after the US-led invasion to dislodge the Taliban.

“The money was spent for different reasons: operation objectives, helping wounded and sick (people) and for house rents and others objectives,” the president said, without giving further details.

“These assistances were very productive and we thank them.”

The statement relayed comments that Karzai made at a press conference in Finland in response to The New York Times article.

There appeared to be no oversight of the secret CIA money, which was aimed at gaining influence by paying off warlords and politicians including some linked to the drug trade and even the Taliban, the Times reported.

The newspaper, citing anonymous officials, said the CIA money had fueled corruption and funded warlords as the US tries to secure stability in Afghanistan before international troops pull out next year.

“The biggest source of corruption in Afghanistan was the United States,” one American official was quoted as saying.

Khalil Roman, who served as Karzai’s deputy chief of staff from 2002-2005, told the Times that the cash — which sometimes arrived at the president’s office in plastic shopping bags — was known as “ghost money”.

“It came in secret, and it left in secret,” Roman said.

The United States has long been known to funnel cash to supporters in Afghanistan, as it did in Iraq.

However the Times story is one of the first accounts to put a figure on the amount of cash sent specifically to Karzai’s office.

Iran earlier made cash payments to one of Karzai’s top aides, the Afghan president acknowledged in 2010. However the Iranians have stopped such payments while the CIA payments continued, the Times reported.

The revelations will fuel fears about Afghanistan’s progress towards becoming a sovereign country after more than 11 years of international intervention.

“We should be lucid: a country that depends almost entirely on the international community for the salaries of its soldiers and policemen, for most of its investments and partly on it for its current civil expenditure cannot be really independent,” he told an embassy cocktail party.

Taliban militants have battled the Western-backed government and US-led foreign troops ever since their 1996-2001 government was toppled.

The 100,000-strong international military force will end its combat mission by the end of next year and Afghan forces will soon take nationwide responsibility for security despite concerns about their effectiveness.

Billions of dollars in aid have been pledged to help Afghanistan after NATO troops withdraw, but only on condition that corruption is brought under control.

Karzai is on the first leg of a tour to Finland, Estonia and Denmark.