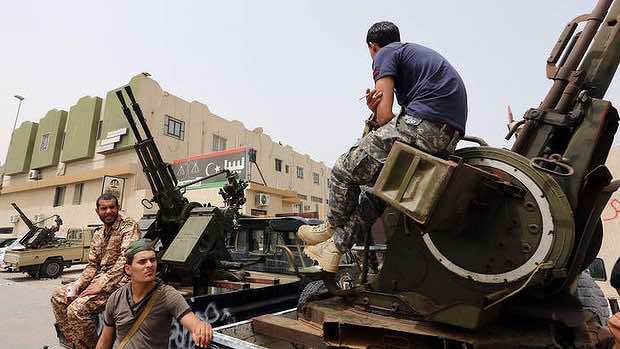 Gunmen demanding the sacking of former officials from the ousted regime of Moamer Kadhafi were on Wednesday still surrounding the foreign and justice ministries in the Libyan capital.

Vehicles equipped with anti-aircraft guns and rocket launchers blockaded the justice ministry building, several kilometres (miles) from the city centre, where traffic flowed smoothly on the May Day holiday.

Militiamen also showed no sign of lifting the siege of the foreign ministry, which they first encircled on Sunday.

“The siege of the foreign and justice ministries is continuing and will go on until our demands are completely satisfied,” Aymen Mohammed Abudeina, a member of a group committed to ensuring the exclusion of former Kadhafi officials from public life, told AFP.

On Tuesday, the justice ministry dismissed the idea of using force to break the siege, saying that the government preferred to “let wisdom prevail.”

The militiamen who had been surrounding the foreign ministry extended their siege to the justice ministry on Tuesday to press for the expulsion of former regime officials from government posts.

The same groups briefly occupied the finance ministry on Monday, and angry policemen invaded the interior ministry twice, on Monday and Tuesday, to demand higher pay and promotions.

On Sunday, former rebels briefly blockaded the headquarters of Libyan national television, although broadcasts were not interrupted. They had previously been responsible for security at the building.

The General National Congress (GNC), Libya’s highest political authority, has been studying proposals for a law that would see top figures from the Kadhafi regime sacked from their posts.

The proposals have caused a stir among Libya’s political elite, as several senior officials in the current administration could be affected by such a law.

Under increasing pressure from demonstrations, the GNC said on Monday that it was suspending plenary sessions until Sunday.