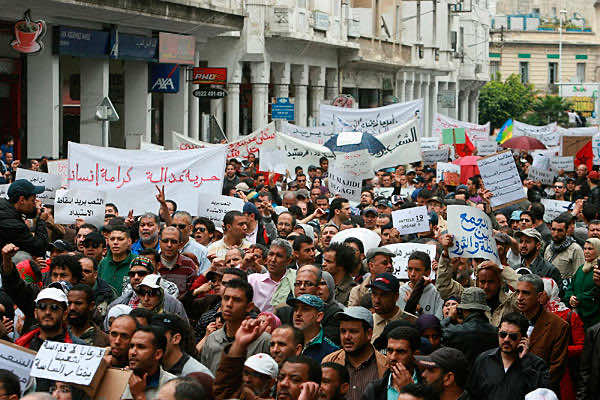 Thousands of people took to the streets of Rabat on Wednesday demanding jobs and pay rises, during May Day demonstrations marked by tensions, with a large security contingent deployed in the Moroccan capital.

Several thousand people marched up the city’s central boulevard at around midday, waving Moroccan and Berber flags, holding placards and chanting a wide range of slogans, mostly in a carnival atmosphere.

But scuffles broke out as the demonstrators passed the parliament building, with riot police beating and wounding some of the protesters.

“The people want the fall of the government!” shouted members of one workers union.

Another group, the workers union affiliated to the ruling Islamist Party of Justice and Development (PJD), called for an end to corruption and proclaimed its support for the king and Morocco’s ownership of the disputed Western Sahara.

Many of those participating in Wednesday’s rally were unemployed graduates, or public sector employees demanding better working conditions.

“When the PJD came to power, they said they’d find a solution to the job crisis. But they’ve done nothing to help us,” said Mohammed Abdelmoneim, 27, who has been out of work since graduating last year.

“We are asking for better worker conditions, a pay rise so that we can afford to feed our families,” Mohammed, a 40-year-old civil servant, told AFP.

Morocco is grappling with an economic crisis linked to the problems in Europe, its top trade partner, amid widespread poverty and youth unemployment estimated to be as high as 30 percent, which causes near-daily protests in the capital.