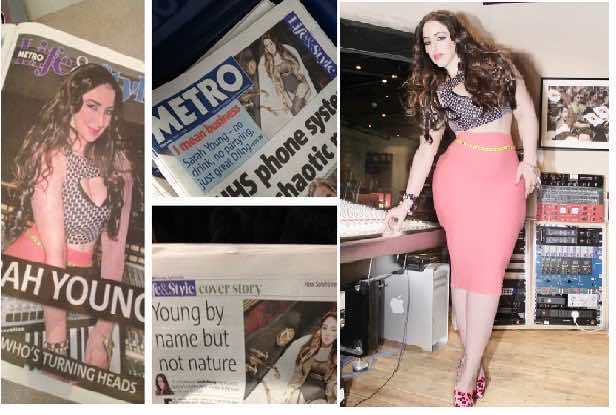 DJ and Producer Sarah Young announced via twitter two weeks ago that she was set to visit the kingdom of Morocco on an official press trip to meet with fans and international press.

The young music maker arrived in Marrakesh on Monday and will be staying 4 days to do a series of interviews with international press to promote her music and to meet her many fans. With a mixed heritage, Arab speaking Sarah treasures her Middle Eastern and Moroccan fans and is quoted to be “overwhelmingly excited” for her forthcoming trip.

Sarah caused quite a stir in the UK last week when the world’s largest free newspaper ‘The Metro’ featured her on the front page. In the cover story she spoke about the international influences on her music where she “grew up listening to Indian and Arab music, Billie Holiday, jazz and reggae.” With some prompting from the journalist for after-party and music industry gossip, Sarah went onto confess that she doesn’t drink and prefers the more chilled lifestyle, “I play the gig, then I go home, clean and make some food. Respect to anyone who likes the parties but it’s just not my thing.”

With very few women in the business of DJ-ing compared to their male counter parts, does she find this difficult? Quoted in the Metro, Young states, “I’ve always been a girly-girl and some people might stereotype female producers and DJs but I’ve always worked with a mixed-gender team who believe in equality.”

Music being her number one priority, the London beauty told us how she plans to make a dance track with Moroccan music influences in the next few months. Sarah’s support for culture extends not only to music but also to Middle Eastern and Moroccan talent in fashion, as seen on her Instagram account (djsarahyoung). She is also the ambassador to several abaya and kaftan labels/designers. We wonder if the trend will catch on in London?

Young is releasing a remix each month called ‘Unofficial’ on her website iamsarahyoung ; Sarah presents new music show ‘The Beat’, see the beat channel, follow her on twitter @sarah_young.