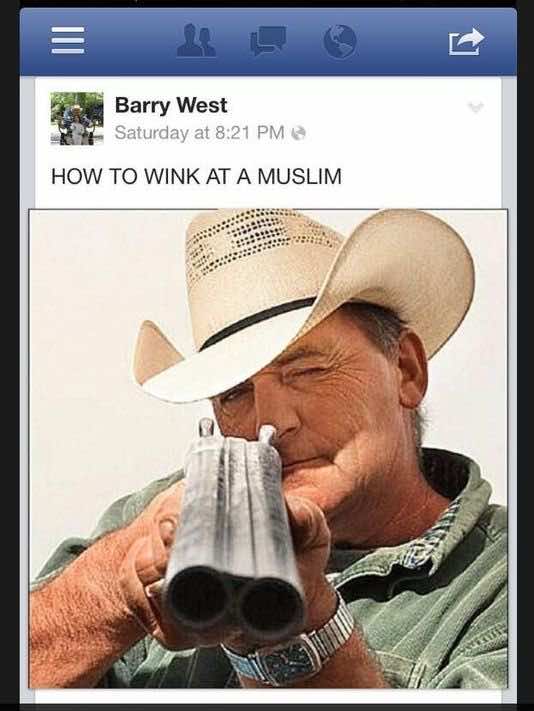 The terrorist attacks of 9/11 on New York reshaped the West’s conception of Islam and Muslims and deepened cultural misunderstanding between the two entities. The stigma that Islam incites violence and hatred became pervasive among people in America and Europe and many people reacted violently against Muslims and their Islamic centers and Mosques. After twelve years, Boston bombings revived the feelings of hostility against Muslims and Islamophobia is again on the rise, especially in the United States, as Hatem Bazian, director of the Islamophobia Research & Documentation Project at the University of California Berkeley affirms.

The latest act interpreted as racist was committed by Middle TN commissioner Barry West who posted a photo that suggests Muslims should be greeted from behind a rifle’s barrel. The photo shows a man brandishing a double barrel rifle with the phrase “How to wink at a Muslim.” Barry West’s act follows a series of recent anti-Muslim Islamophobic incidents in Tennessee including at least four acts of mosque vandalism.

Muslim community in Tennessee interpreted the photo as a threat to Muslims and asked for apology from Barry West but the latter sufficed himself with the deletion of the photo and a short e-mail that reads: “No I did not Twitter this … no I did not create this picture … yes I shared it … so why am I being singled out?”

Mayor David Pennington could not explain why Barry West posted such a racist content on Facebook and said that he would admonish commissioners at their next meeting to be more careful about what they post on Facebook. He also downplayed the effect of this incident on the long supportive relationship between Muslim business owners and county government.

Daniel Tutt, an Episcopalian interfaith activist and a research fellow at the nonprofit Institute for Social Policy and Understanding in Washington, suggested that Barry West should publicly apologize for Muslims and meet Middle Tannessee Muslims privately to get to know them better. “The initial reaction from Muslims will be,‘This is unfortunate, but we’ve seen a lot of this.’ But it’s not acceptable. If the same thing were done to the Jewish or African-American communities, it would not be tolerated,” says Daniel Tutt.