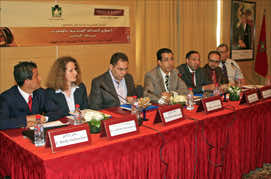 Reforms to the legal system in Morocco continue to provoke public debate and many Moroccans now want to see a legal system with guarantees of a fair trial.

It is against this backdrop that young lawyers and campaigners have become increasingly involved in working for a modern, outward-looking legal system.

Meeting on April 17th in Casablanca to discuss reforms to criminal justice legislation, young lawyers, judges and barristers tried to pinpoint exactly where the legislation is falling down.

Outside the meeting, Affat Omar, a lawyer from Casablanca, told Magharebia that Moroccan criminal justice legislation was in need of considerable reform, particularly in its technical aspects, so that it can support the spirit of the new Constitution with its guarantees of a fair trial for all citizens.

“We absolutely need to review the way in which the legal machinery works so that we can pinpoint the various things which are going wrong,” the lawyer said.

Réda Oulamine, who chairs the Law and Justice Association, shares the view: “In a state subject to the rule of law, criminal justice legislation is guided by basic principles such as the presumption of innocence, preventive detention and legal aid etc.”

He added that if work was needed, then it had essentially to do with confidence because, he explained, equitable justice is based on respect and confidence, rather than fear and torture.

Abdelaziz Baâli from the Moroccan Magistrates Club said that despite the new constitution being adopted: “Things are still going seriously wrong in terms of logistics, resources and morale in the country’s legal system.”

Those taking part in this meeting were unanimous in calling on the justice minister to provide the resources needed to guarantee that those awaiting trial will have their cases heard fairly and equitably.

Justice Minister Mustafa Ramid said that the national dialogue on reforms to the legal system, which has been running for several months, is bound to result in a consensus on how to introduce greater fairness into the criminal justice system.

In 2011, 955,000 of 2.3 million criminal cases across the country actually ended up being heard by the courts. A lack of financial resources at the ministry, delays in obtaining expert assessments, inconsistencies in legal proceedings, a shortage of human resources and problems with preventive detention have been cited as aspects which continue to tarnish the image of Morocco’s criminal justice system.

Over the past 10 years, criminal trials have numbered more than 14 million, with an average of 1.5 million per year, making up 55% of all cases dealt with by the country’s courts.