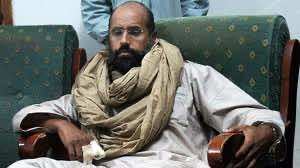 Seif al-Islam, son of Libya’s late dictator Moamer Kadhafi, appeared in court on Thursday charged with illegally trying to communicate with the outside world in June last year, an AFP journalist reported.

The man once assumed to be his father’s heir appeared in good health, wearing blue clothes, at the hearing in the western town of Zintan.

Seated behind a grille and with two masked policemen at his sides, the defendant was relaxed and smiling.

Two lawyers, including one named by the court, represented him.

The judges decided to adjourn the trial until September 19 at the request of the defence team, who asked for more time to study the case.