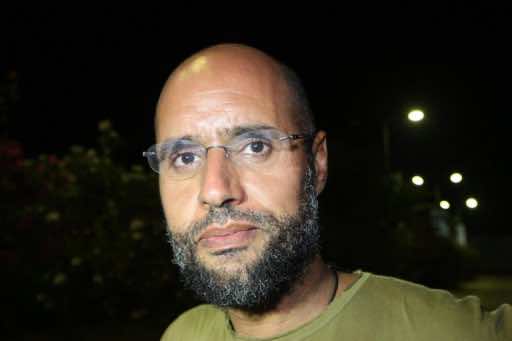 Seif al-Islam, son of Libya’s late dictator Moamer Kadhafi, appeared in court on Thursday charged with illegally trying to communicate with the outside world in June last year, an AFP journalist reported.

The man once assumed to be his father’s heir appeared in good health, wearing blue clothes, at the hearing in the western town of Zintan.

Seated behind a grille and with two masked policemen at his sides, the defendant was relaxed and smiling.

Two lawyers, one named by the court, represented him as he faced the charge of “undermining state security” for meeting four envoys from the International Criminal Court last June.

The charges were levelled against Seif after the ICC team met him in Zintan and were themselves detained for nearly a month, triggering a diplomatic row with The Hague-based court. They were finally allowed to return home in July.

The judges decided to adjourn Thursday’s trial until September 19 at the request of the defence team, who wanted access to the whole file on the case.

Throughout the 20-minute hearing, Seif chewed gum, allowing those present to see that he had lost a tooth from his upper jaw.

When journalists seated near the grille asked if he was well, Seif replied “yes”, and gave a thumbs up.

The defendant did not reply when the judge asked if he accepted the two lawyers assigned to him, but did say that he had no further requests when asked.

The judge also called the four ICC employees, who face the same charges as Seif, but were absent from the hearing.

The four included Australian lawyer Melinda Taylor who was accused of carrying a pen camera and attempting to give Seif a coded letter from his former right-hand man Mohammed Ismail, who is wanted by Libyan authorities.

In January after a first hearing, ICC lawyers slammed the charges, saying that Seif was “essentially being tried for attempting to communicate with the ICC via his Counsel in relation to the fact that his rights had been violated”.

The ICC, which was mandated by the UN Security Council to investigate the Libyan conflict, issued an arrest warrant in June 2011 for Seif, but clashed with Tripoli over where he should be tried.

Only press reporters were admitted to the courtroom on Thursday, and Libyan national television was allowed to film the hearing.