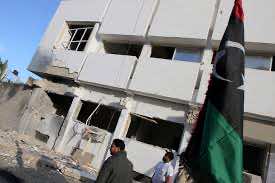 Libyan gunmen besieging two ministries have rejected government demands to disband saying they are determined to stay put until authorities agree to their demand and sack former regime officials, one of them said on Thursday.

“A delegation representing the government of (Prime Minister) Ali Zeidan came to meet us on Wednesday and asked us to lift the sieges but we refused,” the militiaman told AFP outside the encircled foreign ministry.

“We will continue blocking (access to) the ministries of foreign affairs and justice until our demands are completely satisfied,” he added.

The gunmen have encircled the foreign ministry since Sunday and the justice ministry since Tuesday, to demand that the General National Congress adopt a bill that would purge former officials of the ousted regime of Moamer Kadhafi.

The GNC, Libya’s highest political authority, has been studying proposals for a law that would see top figures from the Kadhafi regime removed from their posts.

That has caused a stir among Libya’s political elite, as several current senior officials could be affected.

Under increasing pressure from demonstrators, the GNC said on Monday that it was suspending plenary sessions until Sunday.

GNC Vice President Salah al-Makhzoum said a compromise had been reached among the political blocs by adding “exceptions” in the bill in order to retain key individuals.

He said the bill is expected to be voted on next week.

But the militiaman who spoke to AFP said the bill “falls below the expectations of the protesters” and has been “rejected” by a coalition of partisans of excluding former regime officials.

Observers have said armed groups are using the law only as a pretext because their interests are threatened by Zeidan’s government, which is trying to dissolve the militias.

The former rebels, who helped oust the former regime, have grown in influence in the aftermath of the Libyan uprising that toppled Kadhafi.