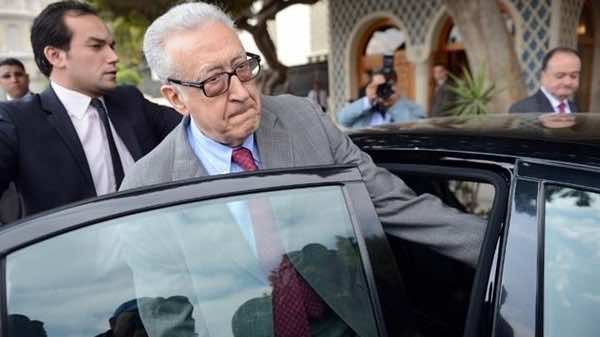 UN-Arab League peace envoy Lakhdar Brahimi is thinking about stepping down as the Syrian war becomes more intractable, but is likely to stay on until at least mid-May, a senior aide said on Thursday

UN and Arab diplomats said on Wednesday the veteran envoy was on the verge of quitting over his frustration with international divisions over Syria and the increased militarisation of the conflict, partly due to Arab states‘ support of the rebels.

“Mr Brahimi did not resign, but as you know he said he thinks about this every day. He didn’t resign and is still carrying out his duties as envoy for the Arab League and United Nations,” the aide said.

“Until now, he is thinking about it,” the aide said, while adding that he is not expected to make a decision before he returns to his Cairo headquarters in mid-May.

Brahimi, a former Algerian foreign minister and UN envoy in Afghanistan and Iraq, had seen a brutal civil war in his country and Iraq, experiences he brought with him when tackling the Syrian conflict, the aide said.

“He said that people are saying we want a political solution but no one is taking serious steps towards that,” said the aide, who requested anonymity because of the topic’s sensitivity.

The civil war has left more than 70,000 people dead since an uprising against President Bashar al-Assad erupted in March, 2011, and the two sides have become increasingly entrenched.

Assad has foiled plans for a serious political settlement while Arab states, particularly Gulf states, have encouraged rebels to keep up their insurgency with a steady supply of weapons.

Brahimi, 79, has been criticised by the Syrian opposition, and Assad’s government said last week it would no longer cooperate with him.

But the Arab League decision to recognise the opposition Syrian National Coalition as the legitimate government of Syria was the final straw for the veteran UN troubleshooter, diplomats said.

Some diplomats said Brahimi could keep a role as an advisor to the UN secretary general on Syria or the Middle East.