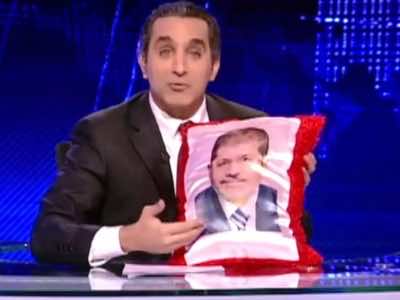 A prominent Egyptian dissident will stand trial on May 5 on charges of insulting Islamist president Mohamed Morsi, a prosecution source said on Thursday.

Ahmed Douma, an opposition activist and blogger, had handed in himself to prosecutors on Tuesday for questioning and was then detained, his lawyer Ali Soliman told AFP.

Douma will stand trial in the Nile Delta city of Tanta where he was arrested on charges of insulting the president by describing him as a “criminal who escaped justice,” the prosecution source said.

Morsi, like other leaders of the Muslim Brotherhood movement, had been arrested and then freed from prison during the early 2011 uprising that overthrew president Hosni Mubarak.

Soliman said the complaint against Douma was brought by a member of Morsi’s Freedom and Justice party, an air conditioner repair man who said he had personally felt insulted by Douma’s comments on Morsi.

Morsi, elected last June, has been accused of cracking down on opposition and critical journalists.

The presidency says it has withdrawn several complaints it filed against journalists accused of fabricating reports about Morsi, but most complaints were brought by private citizens.

Egyptian law allows private citizens to file complaints of defamation even if they were not the targets.

Youssef, who regularly skewers the country’s ruling Islamists on his wildly popular show, was released on $2,200 bail after an interrogation that lasted nearly five hours.

Since taking office, Morsi has faced waves of sometimes deadly unrest led by a loose coalition of secular leaning parties and youth protest movements who helped oust Mubarak in 2011.

Several dozen people have died in clashes with police or in street fighting between Morsi’s Islamist loyalists and the opposition.

The Muslim Brotherhood, on whose ticket Morsi ran in the election, had filed a complaint against Douma among other activists, accusing him of inciting violent clashes outside its headquarters in March.