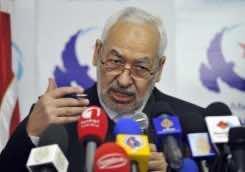 Politicians have reached an agreement on a future political system in Tunisia, ending a months-old stalemate that had blocked progress on drafting the new constitution, the head of the ruling Islamist party said on Friday.

“We have overcome the impasse, we are heading towards a mixed regime where neither the head of state nor the head of the government will have supreme control over the executive power,” Rached Ghannouchi told Tunisian radio.

Ghannouchi did not go into detail on the question of the division of powers, saying only that the president and the prime minister would each have their respective prerogatives.

Ghannouchi’s Ennahda party, which heads the coalition government after scooping the largest share of seats in the national assembly in Tunisia’s first post-revolution polls, has until now been demanding a purely parliamentary regime.

But most political parties, including Ennahda’s allies in the coalition, want key prerogatives to remain in the hands of the presidency, which is currently held by Moncef Marzouki of the secular, centre-left Congress for the Republic.

Work on drafting a new constitution has been heavily delayed by this lack of consensus, with the main political parties having originally agreed that the text would be completed in October in 2012.

The latest draft, published late last month, was strongly criticised by lawyers and the opposition for being too vague on certain highly sensitive issues, notably religion, human rights and gender equality.

A national dialogue held under the auspices of the presidency is currently taking place in a bid to resolve these problems.

Prime Minister Ali Larayedh, appointed in March in the wake of a political crisis sparked by the assassination of an opposition leader, has vowed to have the constitution adopted and legislative and presidential elections held by the end of 2013.