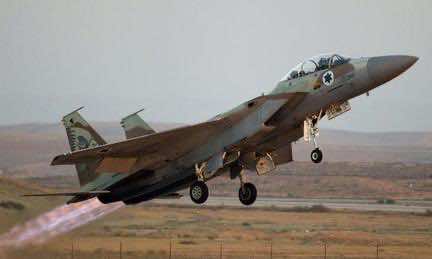 Israel conducted an airstrike in Syria overnight targeting a weapons shipment headed for the militant movement group Hezbollah based in neighboring Lebanon, US media reported.

CNN television said that US and Western intelligence agencies were reviewing information suggesting Israel likely conducted a strike in the night from Thursday to Friday, just as Israel was flying many warplanes over Lebanon.

But the United States does not believe Israeli warplanes entered Syrian airspace to conduct the strikes, it added.

A senior US official told NBC News that the airstrikes were likely tied to delivery systems for chemical weapons.

White House and Pentagon officials declined to comment on the reports.

But Republican Senator Lindsey Graham of South Carolina was quoted as telling an audience that Israel had indeed bombed Syria.

“Israel bombed Syria tonight,” Graham was cited by the Politico news website as saying in passing, without offering any further details.

If confirmed, this would mark the second time that Israel has conducted airstrikes on Syria this year.

Earlier this month, the Jewish state implicitly admitted carrying out a January air strike on a weapons convoy in Syria thought to be en route to Lebanon’s Hezbollah — a long-time Damascus ally.

The reports on the latest strike came shortly after President Barack Obama nearly ruled out deploying US troops to Syria, saying he did not foresee a scenario in which that would be beneficial to the United States or Syria.

Speculation has mounted that the Obama administration could reverse its opposition to arming the rebels after the White House said last week that President Bashar al-Assad likely used chemical weapons on his people.

Obama has been reluctant to intervene in the war but faces mounting criticism that he has allowed the Assad regime to cross his own declared “red line” on using chemical weapons.