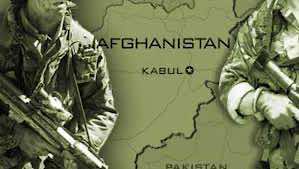 A roadside bomb killed five US troops in the southern Afghan province of Kandahar on Saturday, provincial officials said.