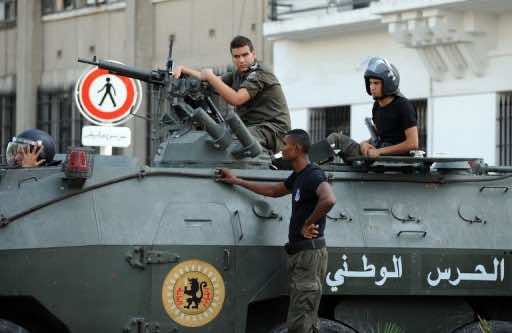 Tunisian forces have been unable to track down jihadists hiding in the border area with Algeria, an operation in which 15 security force members have been wounded, the interior ministry said on Saturday.

The jihadists, holed up in the Mount Chaambi area, “left their initial positions and we have not been able to find them given the size of the 70-square-kilometre (28-square-mile) area operations have been taking place in. They may have split up,” ministry spokesman Mohamed Ali Aroui told AFP.

Soldiers have been pressing their hunt for the gunmen, “raking the area with fire,” and now control Mount Chaambi, he said.

Since Wednesday, the army has been pounding the mountainous area with mortars to clear it of mines, after 15 members of the security forces were wounded by handmade devices placed by the jihadists.

Troops are pursuing a second group with links to the jihadists in Mount Chaambi 100 kilometres (60 miles) farther north in the Kef region, also on the Algerian border, the interior ministry said Thursday without giving further details.

Algiers has also boosted surveillance on its side of the border to prevent the group crossing into Algeria, a security source told Algerian daily El-Watan.

The Tunisian interior ministry spokesman said the group in Mount Chaambi was made up of no more than 20 people, and that their names were known.

However, a military source who has taken part in the Chaambi operations told AFP that the group was made up of more than 50 fighters.

Soldiers have seized caches of explosives, documents and food supplies since the operations began.

The group being hunted in the Chaambi region was blamed for an attack on a border post in December that killed a member of the national guard, and the security forces have been searching for the jihadists ever since.

In late December 2012, authorities announced the arrest of 16 jihadists with links to Al-Qaeda in the Islamic Maghreb (AQIM), but they have not said whether the group responsible for the fighting around Mount Chaambi has links to the network.

Since the mass uprising that toppled Zine El Abidine Ben Ali in January 2011, radical Islamists suppressed by the former dictator have become increasingly assertive in Tunisia.