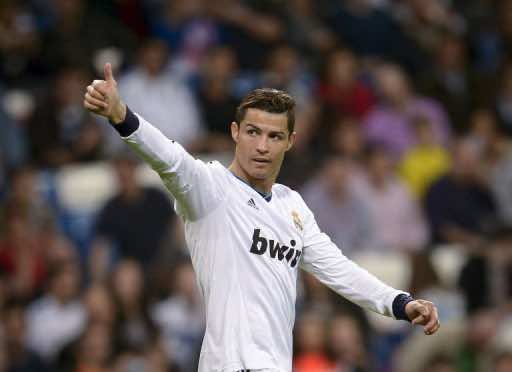 Real Madrid forced Barcelona to delay their title celebrations as two goals from Cristiano Ronaldo helped them to a 4-3 win over Valladolid at the Santiago Bernabeu on Saturday.

The result cut Barcelona’s lead at the top to eight points, although they can restore their advantage to 11 points with victory over Real Betis on Sunday.

The visitors had taken a shock lead early on as Oscar Gonzalez slotted past Diego Lopez from a narrow angle.

However, Marc Valiente’s own goal and a Ronaldo header put Madrid 2-1 in front before Javi Guerra finished off a flowing Valladolid move to ensure they went into half-time on level terms.

Kaka restored the hosts’ advantage just after the break and Ronaldo looked to have sealed the points when he again found the net with his head 21 minutes from time.

Valladolid were given a late lifeline though when Oscar scored his second of the evening with a sensational long-range volley that found the bottom corner.

But Real held on to ensure a disappointing week given their failure to reach the Champions League final on Tuesday did end with some consolation.

The hosts had been caught cold early on when a slack crossfield pass from Angel Di Maria was intercepted by Oscar and he galloped clear behind the Real defence before slotting past Lopez at his near post.

The goal seemed to spark Madrid into life though and after Kaka had forced Jaime Jimenez into a fine flying save, they were level on 26 minutes when Di Maria cut inside and saw his goalbound drive deflected into his own net by Valiente.

Jose Mourinho’s men continued to force the pace after drawing level as Ronaldo saw a free-kick deflected just wide and from the resulting corner Jaime made a brilliant save to parry a Pepe header from close range.

However, there was nothing the Valladolid keeper could do moments later as the Portuguese rose highest to meet Di Maria’s in-swinging cross to flick home his 32nd league goal of the season.

Just three minutes later though Valladolid were level again as a wonderful pass from Oscar released Omar Ramos down the left and his low cross was turned in at the far post by Guerra.

Madrid could still have easily gone into half-time in front as Karim Benzema had the ball in the net seconds after Valladolid’s equaliser only to have been ruled very marginally offside and Ronaldo also saw an incredible free-kick came back off the bar.

The hosts started the second period as they had finished the first though and were back in front three minutes after the restart as Benzema played in Kaka and Jaime couldn’t keep the Brazilian’s shot out despite getting a hand to it.

Ronaldo then just failed to get over Fabio Coentrao’s cross as another headed effort drifted over before Mourinho introduced Mesut Ozil and Xabi Alonso in a bid to finish the game off.

And just two minutes later from Ozil’s corner Ronaldo again leapt highest to nod his second of the afternoon into the far corner.

However, some late slackness from Real allowed Valladolid back into the game and after Patrick Ebert could only turn Antonio Rukavina’s cross onto the roof of the net, Oscar did half the deficit with a sensational volleyed strike from fully 30 yards into Lopez’s bottom left-hand corner.