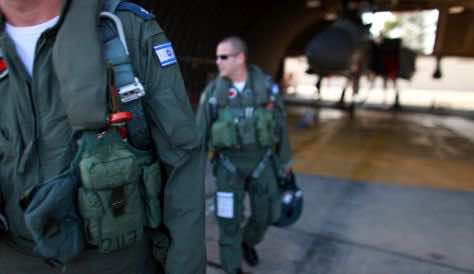 “The attack was very close to the airport, the target was Iranian missiles which were destined for Hezbollah,” he told AFP, speaking on condition of anonymity.

Earlier the official Syrian SANA news agency accused Israel of carrying out the attack on the Jamraya military research centre in the Eastern Ghouta region. It did not say if there were any dead or wounded.

“This new Israeli aggression is a clear attempt to alleviate the pressure on the armed terrorist groups after our army beat them back in several regions and after the army’s victories on the road to recovering security and stability in Syria,” said SANA.

There was no immediate comment from Israel or the United States.

If confirmed, the attack would be Israel’s second this week against targets inside Syria and also its second this year on the Jamraya facility, following a January 30 raid that angered Syrian allies Iran and Russia.

“This attack proves the direct involvement of the Israeli occupation in the conspiracy against Syria and its links with terrorist groups in the aggression supported by Western countries and some Gulf countries,” SANA said.

Israel has frequently warned if Syria’s stockpile of chemical weapons falls into the hands of arch-foe Hezbollah, a close ally of Assad’s regime, it would be a casus belli.

Its most recent strike targeted a weapons shipment to the militant group Hezbollah overnight Thursday, US media reported, but the Jewish state has refused to confirm or deny the bombing.

A Lebanese diplomatic source said the strike destroyed surface-to-air missiles recently delivered by Russia that were being stored at Damascus airport.

The raid in January, which was implicitly confirmed by Israel, targeted surface-to-air missiles and an adjacent military complex believed to house chemical agents, a US official said at the time.

Damascus has threatened to retaliate, further fuelling fears of a regional spillover of a two-year conflict the UN says has killed more than 70,000 people and uprooted more than one million as refugees.

US President Barack Obama, speaking after this week’s first reported attack, said Israel was justified in protecting itself against arms shipments to Hezbollah.

“The Israelis justifiably have to guard against the transfer of advanced weaponry to terrorist organisations like Hezbollah,” he said, without commenting directly on the strike.

A Syrian military source denied the airport raid had taken place at all, and an Israeli defence official would say only the Jewish state “was following the situation in Syria and Lebanon, with an emphasis on transferring chemical weapons and special arms”.

Syrian rebels from the Al-Ezz bin Abdul Salam Brigade take part in a training session at an undisclosed location near Jabal Turkmen in northern Latakia province on April 24, 2013. The UN says the civil war in Syria has left at least 70,000 people dead since March 2011.

But a diplomatic source in Lebanon told AFP the operation destroyed surface-to-air missiles delivered by Russia that were being stored at Damascus airport.

The Observatory, meanwhile, said the bodies of dozens civilians, including children, were found in the northwestern Syrian port of Banias a day after an assault by regime troops.

“We have identified 62 citizens by their names, photos, or videos, including 14 children, and the number could rise because there are dozens of citizens who are still missing,” it said.

The National Coalition, the war-torn country’s main political opposition bloc, condemned “a proliferation of massacres that is transforming into an ethnic cleansing operation like that carried out by Serbian forces in Bosnia 20 years ago”.

The Observatory said at least 50 people had been killed Thursday in the Sunni village of Bayda, just south of Banias.

“Some were summarily executed, shot to death, stabbed or set on fire,” it said.

Another 10 people were killed in the Banias district of Ras al-Nabaa on Friday, the Observatory said, distributing grisly footage of dead bodies, including those of children.

“Hundreds of families are fleeing Sunni neighbourhoods in Banias in fear of a new massacre,” said the Observatory’s Rami Abdel Rahman.

Elsewhere, regime forces and Hezbollah fighters advanced towards the town of Qusayr in the central province of Homs, where at least 16 people were killed, said the Observatory.

With the violence mounting and pressure on Washington to arm Syria’s outgunned rebels, President Obama said he does not envisage deploying US troops to Syria.

Speculation has mounted that the Obama administration could reverse its opposition to arming Syria’s rebels after the White House said last week Assad had probably used chemical weapons on his own people.