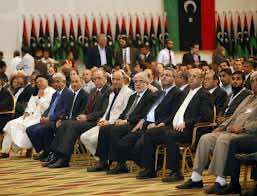 Libya’s General National Congress met Sunday ahead of a vote on a controversial law to exclude former Kadhafi-era officials from government posts amid pressure from armed militias to pass the bill.

“The bill on political exclusion is on today’s agenda. Depending on how the sitting goes, we will decided whether the vote goes ahead or not,” independent GNC member Abdelfattah Sheloui told AFP.

“They are leaning towards a vote today,” he added.

The Congress, Libya’s highest political authority, has been studying proposals for a law that would see top figures from the regime of late dictator Moamer Kadhafi sacked from their posts in government.

Gunmen in Tripoli have encircled the foreign ministry for a week and the justice ministry since Tuesday, to demand the speedy adoption of the bill, adding to pressure on the GNC.

Proposals for the law have caused a stir among Libya’s political elite, as several current senior members of the government could be affected.

The GNC has debated the law in several sessions, but has failed to reach an agreement, although vice president Salah al-Makhzum said a compromise had been reached among the political blocs by adding “exceptions” in the bill in order
to retain key individuals.

Some Libyans have objected to the gunmen’s siege of the ministries pushing for the exclusion law, and on Friday, demonstrators against the militias clashed with a rival protest in support of the law in the capital Tripoli.