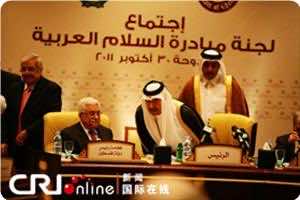 Egypt denied Sunday that an Arab League Middle East peace plan was amended to include land swaps between Israel and a future Palestinian state, after Qatar suggested Arab acceptance of the proposal.

His statement was welcomed by the United States, the main broker in talks between the Palestinians and Israel, and by the Jewish state itself.

But Egyptian Foreign Minister Mohamed Kamel Amr said there had been no change in the Arab League’s 2002 plan, which called on Israel to withdraw from all territories it occupied in 1967 in return for diplomatic recognition.

“Any talk of land swaps being merged into the proposal is not true,” Amr told reporters.

The Palestinians have played down a shift in the Arab League’s stance, saying they had already agreed in past talks with Israel on minor land swaps in which Israel would retain some settlement blocs in the West Bank.

Israeli Prime Minister Benjamin Netanyahu has categorically rejected outright any return to what he has said would be the “indefensible” lines before June 4, 1967.