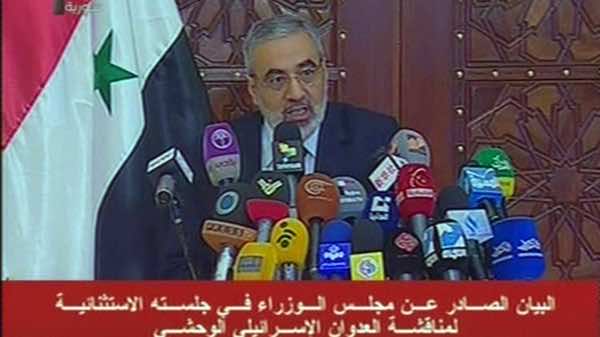 Syria’s government condemned Israel’s attacks on Damascus early Sunday saying that the “Israeli aggression opens the door to all possibilities,” without elaborating on any potential retaliation.

Syrian Information Minister, Omran al-Zoubi, said in a press conference that the Israeli aggression has made the region “more dangerous.”

The statement comes after Israeli strikes earlier on Sunday hit a military target outside Damascus. The attack was considered to be the Jewish state’s second reported raid on Syria this week, with residents saying it felt like an earthquake and turned the sky red, reported AFP.

The Arab league has also demanded on Sunday that the U.N. Security Council “act immediately to end Israeli attacks on Syria,” which it described as a “dangerous violation of an Arab state’s sovereignty,” AFP said.

The Egyptian presidency has also condemned the aggression saying the air strikes “violated international law and principles that will further complicate the situation.”

The sites targeted were — a military facility, a nearby weapons depot and an anti-aircraft unit in Sabura — a diplomatic source in Beirut told AFP.

“This new Israeli aggression is a clear attempt to alleviate the pressure on the armed terrorist groups after our army beat them back in several regions and after the army’s victories on the road to recovering security and stability in Syria,” SANA said.

The Syrian government made a statement Sunday morning saying the Israeli strikes managed to kill and wound several people as well as causing an evident amount of damage.

British Foreign Secretary William Hague also reacted to the strikes on Sunday. Hague said this showed that peace across the whole region was under threat, and reinforced the need to lift an arms embargo on Syrian rebels.

“But what I can say is that these events, and many other events of recent days, do show increasing danger to the peace of that entire region from the Syria crisis just getting worse and worse.”

Hague added: “Lebanon is constantly threatened by being destabilised, huge numbers of refugees are crossing the border, Jordan is under incredible strain.

“And Israel has made very clear that it will act if it believes that important weapons systems are being transferred to Hezbollah.”

Hague said that “Israel will act to protect its national security, we do have to respect that.”