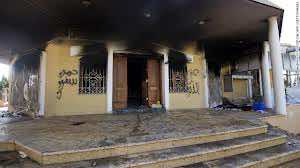 A key US diplomat has sharply disputed the Obama administration’s initial account of an attack on a US mission in Libya that killed the US ambassador and three others, CBS reported Sunday.

The US deputy chief of mission in Libya, Greg Hicks, told congressional investigators that, from the outset, the September 11, 2012 attack on the mission in Benghazi was seen as a terrorist event by those on the ground, CBS said.

The disclosure revives a long-simmering controversy over a statement by Susan Rice, the US ambassador to the United Nations, soon after the attack that the attack had originated as a spontaneous protest over an anti-Muslim Internet video.

Republicans have pressed to know whether Rice’s talking points were changed, either to deflect attention from the State Department’s failure to step up security in Libya or to conform to Obama reelection campaign messages highlighting progress in the war on terrorism.

The administration, which later acknowledged that the attack was pre-planned and not spontaneous, attributed the initial account to confusion about what was happening on the ground.

But CBS, quoting from a transcript, said Hicks told investigators there had been no indication of a protest outside the Benghazi mission.

He insisted that Chris Stevens, the US ambassador who was visiting the Benghazi mission, would have reported signs of a demonstration, saying it was “unbelievable” he would have failed to report a protest at his “front door.”

Stevens was killed along with three others after militants linked to Al-Qaeda stormed the Benghazi mission and a nearby CIA compound. An internal probe ordered by former secretary of state Hillary Clinton found that no US forces would have got to Libya in time to stop the attack.

Hicks is scheduled to appear on Wednesday before the House Oversight and Government Reform Committee, one of three witnesses who Republicans have called “whistleblowers.”

The two others, also from the State Department, are Mark Thompson, deputy coordinator for operations in the Counterterrorism Bureau, and Eric Nordstrom, the top security officer in Libya in the months leading up to the attack.

Republican lawmaker Darrell Issa, who heads the committee said on his Twitter feed Saturday the three have “critical info” about the attack “that differs from what Admin officials have portrayed.”

John Kerry, who took over from Clinton, has denied claims the State Department had failed to be transparent enough.

“Look there’s an enormous amount of misinformation out there,” he said, adding his chief of staff David Wade was now closely in touch with Congress to answer any lawmakers’ questions.