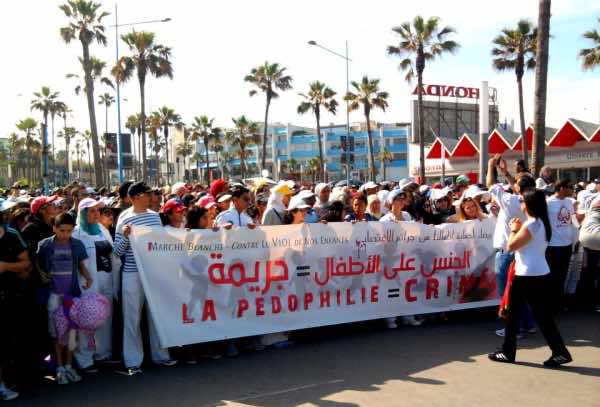 The most invaluable thing that humans have been endowed with since the first man stepped on earth is their very humanity. Once one loses this blessing, not much a difference is left between a human and any other living species on earth’s surface. Much worse, when this very blessing is lost by means of a savage act, such as assaulting and raping an innocent child, other living species become more ‘human’ than the perpetrator. 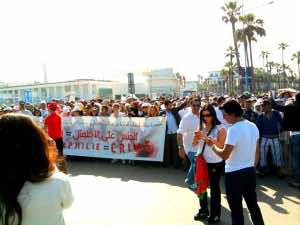 The images of a hospitalized Wiam, the 9-year old Moroccan girl who was a victim of an atrocious act of violence, has shaken the very depth of our hearts. After helplessly resisting a pedophilic individual who attempted to rape her, Wiam was left with nothing but painful physical injuries induced by his sickle, and tremendous psychological wounds caused by his act.

For Wiam and all innocent Moroccan children who have suffered similar abuse, millions of Moroccans took to the street today on May 5 in a breathtaking “white march” from Megarama cinema to Sindibad, all along La Corniche neighborhood in Casablanca.  Countless Moroccans walked with their fellow citizens, relatives and children, for whom the march was organized in the first place.

Artists, authors, politicians, laymen and laywomen all walked hand in hand against the same social cancer that threatens their beloved children: pedophilia.

According to Louay Benaabdelaali, one of the participants of this march, “The initiative started at 10:15 from Megarama onwards by Ain diab coast.” 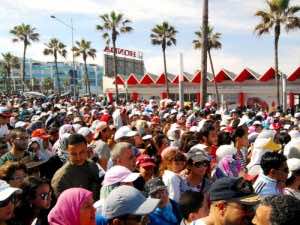 However, the march was not immune from chaos and miscoordination, as some of those who took part in it seemingly marched and spoke their minds for causes irrelevant to the central cause of the demonstration, which was to protest against pedophilia. “The march was supposed to be silent, without boards or signs,” shared the participant. “Yet many people didn’t respect that, especially those marchers who were chanting political songs, out of the context of the march, which was to generate attention about sexual abuse against children,” he added.

Yet, the noble initiative certainly demonstrated Moroccans’ aspirations for urgent change and reverberated their collectivistic and humanistic spirit, along with their sincere care for the welfare and safety of their fellow Moroccans’ children.

“We know that Wiam is not the only victim of such crimes,” shared some of the march organizers in a statement. Hence, the question remains whether such a heartwarming march would be enough to stop the inhuman and abnormal actions of pedophiles.

Wiam’s tragic predicament has stirred Moroccans’ compassion, generous love and sincere sympathy towards her. It has ‘woken’ up Moroccans’ conscious and alarmed them about a danger that can be inflicted upon their children at any instant.

Though the march might not compensate the 10-year old victim, the noble initiative will surely remind all pedophiles, lurking somewhere in the dark corners of Moroccan streets and hills, that Moroccans are denouncing their monstrous intentions, and will all stand hand in hand, firmly, to defend their and other fellow Moroccans’ children with all their means.