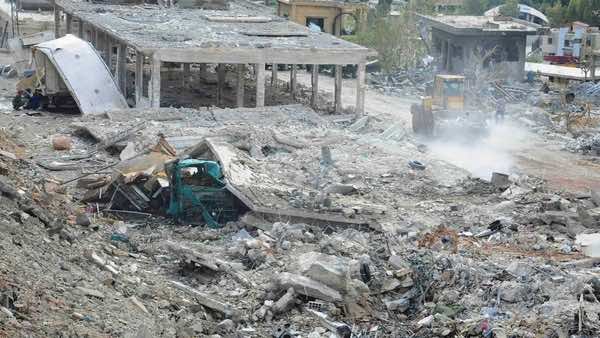 A doctor at the Syrian military’s Tishreen Hospital said there were at least 100 dead soldiers and many dozens more wounded, the Times reported.

Meanwhile, The Syrian Observatory for Human Rights watchdog said on Monday that the Israeli strikes on Syrian military targets at the weekend killed at least 15 soldiers and dozens more were unaccounted for.

“At least 15 soldiers were killed, and dozens more are missing” after the strikes near Damascus early on Sunday, the Observatory’s Rami Abdel Rahman told AFP news agency.

“These three sites (targeted) would usually have around 150 soldiers in them, but it’s not clear if they were all there at the time of the strikes.”

Syria said on Sunday that Israel had targeted three military sites near Damascus, with a diplomatic source in Beirut saying the attacks were against a military facility, a weapons depot and an anti-aircraft unit.

The Syrian government has not given an official toll from the attacks, but the foreign ministry said in a letter to the U.N. that the Israeli “aggression caused deaths and injuries and serious destruction.”

An senior Israeli source said the target was weapons destined for Lebanese group Hezbollah, which is allied with the regime of Syrian President Bashar al-Assad.

But a top Iranian general said any arms Israel targeted in Syria did not come from the Islamic republic, in remarks published on the Revolutionary Guards website on Monday.

Brigadier General Masoud Jazayeri “denied Western and Israeli media reports that an Iranian weapons depot has been targeted in Syria,” the website reported.

“The Syrian government does not need Iran’s military aid, and these sorts of reports are propaganda and psychological war,” added the deputy chief of the armed forces.

The TV reported the explosions that rocked Jamraya were caused by an Israeli missile strike on the research center that took place at 1:56 a.m. local time.

“Everything was quiet and suddenly we saw this bright orange light in the sky followed by a very loud explosion,” said Tarek Hillnawi, a Damascus resident who was sitting on his balcony chatting with his friends when the blast occurred.

“I felt that it was over for us, that all of Damascus has been set on fire.”

At least 40 blasts were heard across the capital following the alleged Israeli attack, which according to activists, targeted the Syrian government’s security forces sites in Damascus, including the Maher al-Assad Fourth Division Military Group and the weapon depot of the Syrian Republican Guard in Jamraya. Syrian state media denied these attacks.