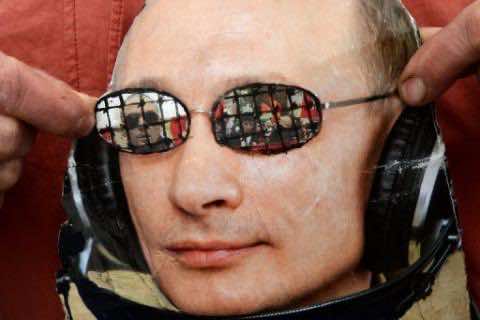 Thousands of protestors filled a Moscow square Monday to denounce President Vladimir Putin a year into his new term and rekindle the momentum that was brutally quashed when a protest last year led to mass arrests.

Organisers said tens of thousands turned up for the rally, which marked one year since a chaotic May 6, 2012 anti-Kremlin protest that descended into violence and Putin’s return to the presidency a day later.

Police estimated the numbers at 8,000.

“Putin is a thief,” charismatic opposition figurehead Alexei Navalny said to cheers from the crowds. “We will throw him out of the Kremlin.”

The long-awaited protest was however clouded by the death of a worker earlier Monday who was crushed by a massive loudspeaker as he was helping to erect the stage for the event.

The incident forced a last-minute shake-up of logistical plans, with organisers turning a truck into an impromptu stage at Bolotnaya Square over the Moscow river from the Kremlin.

Navalny, who is standing trial on what he says are trumped-up charges, made a long-awaited appearance at the rally on a blustery spring evening, delivering a campaign-style stump speech from the truck decorated with roses.

“Together with you I am not afraid of anything,” the blue-eyed 36-year-old said, his wife Yulia standing next to him in a conjugal appearance reminiscent of a US presidential candidate.

I will never surrender and I will never go away. I am fighting for a new future for my family, for my children and so are you,” said Navalny.

Monday’s rally marked the protests on the eve of Putin’s inauguration for a historic third presidential term that resulted in more than 400 arrests after scuffles with riot police.

More than two dozen people now face jail over their involvement in last year’s rally in a criminal probe activists have condemned as a throwback to the Stalin era.

A leading opposition journalist sang from the stage, a famous actor read out a poem and one of Russia most loved actresses, Liya Akhedzhakova, read a letter from one of the jailed activists.

“The whole square is full. There are tens of thousands of us,” said former government member turned Putin critic Boris Nemtsov, clutching a bunch of white roses.

Flowers were laid by a railing in memory of the dead worker while a minute of silence was held in his honour before the event got under way.

A van from the Investigative Committee was conspicuously parked right behind the stage as the probe into the worker’s death continued.

He was not an opposition activist but the employee of a firm contracted to prepare the stage, organisers said.

The opposition hopes the latest rally will breathe new life into the sputtering protest movement following what observers say is the toughest crackdown on dissenters of Putin’s 13 years in power.

“I think something decisive will happen today. I want real changes,” said Tatyana Pereverzova, an activist from Saint Petersburg who works for a security firm.

One protester held a hand-written placard reading “Do not let them trample the heroes of Bolotnaya” square, while another participant held a placard saying “While someone is in chains no one is free.”

In Russia’s second city Saint Petersburg police said some 750 people gathered in the city centre, while organisers put the turnout at over 1,500.

The last major opposition rally was held in Moscow in January when some 20,000 people took to the streets to protest a Kremlin decision to ban adoptions by Americans in retaliation to US legislation targeting Russian officials.