Morocco World News
Home Education Reflections on language and Society: What if Sapir and Whorf were right? 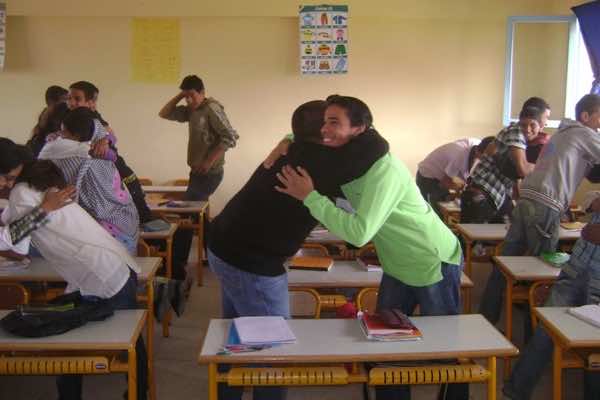 Language as a human artifact can be approached from manifold vintage points depending on the focal point predetermined. If we are concerned about the communicational aspect, then language represents a codified message produced by a sender intercepted by a receiver through a channel.

But once language is submerged in an ampler context, then the scope of vision should include the miscellany of social factors that impinge on the speaker‘s word choice. In this perspective, language constituted a social behavior or a cultural trait since it is essentially conditioned by social conventions and alternately manipulated by the interlocutor’s intentions. Language becomes unequivocally a harbinger of social status manifested in various aspects such as the speaker’s accent, style and the frequency of code switching. Language can also reveal political affiliation as it can also give a retrospect about a nation history.

However, the matter becomes more intricate when language is approached through its dialogical relation with the Human mind. The old philosophical debate about language and the mind can be rekindled once again. There is no argument that language is first constructed in the mind according to the conventional rules of morphology (word formation), semantics (meaning) and syntax (structure). The only difference resides in the fact that linguistic structure designed in the mind is not confronted to the constraints of air movement in the vocal apparatus.

Yet, we cannot deny that during the process of thinking we can hear sounds though they have not been uttered yet. It is indeed the image of the sound that is retrieved from the large repertoire of sounds. In other words, the mind has the ability to visualize the way the sound would come out once uttered.

The individual can easily determine whether the sound is a bilabial (produced by the lips) or pharyngeal (produced at the level of the pharynx whereas the manner of articulation, whether the sound is voiced or voiceless, whether it is nasal or not, remains less obvious since it stems essentially from the subtle interaction between the organs of speech and the flow of air.

It is not a problematic issue to determine which one occurs first, the idea or the word, since the issue can be resolved as soon as we accept that thought and language are simultaneous. But the challenge is to discern the extent to which language interacts with our conceptual and perceptual systems.

First, it is necessary to avoid making sweeping generalizations about language simply because “language varies “greatly. The common mistake committed in this ancestral debate is the issuing of stringent   postulates that leave no room for variability. The emergence of sociolinguistics in the 60’s and the tools availed by pragmatics provide sufficient evidence that language operates in a volatile environment fraught with variables. Therefore it would be senseless to cling to free floating generalizations such as “Language constrains thought” or “language is the mirror of the mind.”

For it has turned out that the language is undisputedly fashioned by the context in which it occurs. Needless to say.  language is motivated also by the intentions and purposes set forth by speakers. When Sapir and Whorf established their paradigmatic theory on the omnipotence of language over thought and perception, they had in mind the conceptualization of tangible objects like snow. Indeed, the availability of many lexical items to refer to snow in the Eskimo community has the effect to broaden the spectrum of perception. Thus, the Eskimos can differentiate between many forms of snow, while English speakers fail to perceive these differences since they have only one word to refer to snow.

Many scholars tried to single the shortcomings of Whorf’s assumptions and they were right for linguistic determinism fails to encompass all linguistic phenomena. Whorfian theory was soon counterbalanced by linguistic relativity that considers language as the mirror of culture. The main criticism leveled against Whorfian theory is the ability of speakers to perceive things for which they have no label. Therefore Human perception is neither hindered nor dimmed by the absence of linguistic referents.

For instance, for  a person encounters a new gadget and after few manipulations she realizes that this devices is used to spray a liquid, the absence of a word to name this gadget seems not to limit the scope of  her perception, her  sensory exploration and the cognitive mechanisms involved in the identification of its function. The conclusion that seems evident here is that perception and conceptualization operate independently from the use of language. Such claim would constitute an overt attack on Whorfian theory.

Nevertheless, we need to make a clear cut distinction between the words used to refer to tangible objects easily perceived in time and place and the lexis used to refer to abstract ideas such as love, justice, beauty and more particularly social constructs. First we need to understand the true essence of concepts and social constructs. Concepts are metonymical expressions par excellence since a single word encodes a multitude of ideas. Social constructs on the other hand unravel not only facts but the speakers’ attitudes and patterns of thought consensually standardized by society.

Social constructs constitute safeguards for the viability and the stability of social systems.  They anchor individuals in a binding ensemble of ideas and a forced solidarity.  There are of course individuals who would abject and rebel against the rigidity of these constructs. Once these individuals make their ascension to power position or rally many others into their causes, these social constructs are altered and the paradigms shifted.

The theory of linguistic determinism becomes more plausible once applied to the interplay between thought and linguistic labels for social constructs and abstract ideas.  It is customary and more effective for the researcher to examine the deviation and anomalies of a given phenomenon in order to unravel its state of normality. Therefore, it is interesting to consider the role of language in the transmission and the consolidation of bias in society.

The word of virility or “Roujoula” in Moroccan Arabic is paramount not only to the distinction between both genders, but mainly to the assertion of male supremacy in society. The bias stems initially from the asymmetry of power   between genders. Likewise, the expression “Be a man” does not create bias against women for it exists already. Nevertheless, this linguistic word ‘Roujoula” extends largely beyond its denotative function. It is enough to note that virility is considered deficient when the male individual displays some of the female attributes. The expression “Be a man” sums up the attributes often equated with the assertion of virility.

Qualities like courage, endurance or even sexual prowess are associated with masculinity whereas they remain incidental or unmarked when attributed to women. The asymmetry between genders here is not engendered solely by the word itself but mainly through a system of invisible paradigms, often unsaid explicitly which govern society. Nonetheless, the use of such linguistic terms that conceal social constructs is liable to consolidate bias and prejudice against women. Thus, each generation will have to internalize them unconsciously at least before they start challenging them.

The dissemination of bias in society through the use of language becomes self-evident when the bias terms are unconsciously endorsed and unquestionably used by the same categories subjected to prejudice. In many instances women use the phrase in Moroccan Arabic “Khdmat al 3yalat” (women’s way of doing things) to criticize the work of their fellow women. In this situation we can boldly assert that language used to refer to social constructs has the potential to encapsulate the Human   thought by impeding the perception of other possibilities.

The claim that language is an omnipotent arsenal may not be relevant to all linguistic phenomena. Nevertheless, we need to pinpoint that the encoding of social constructs and abstract ideas subscribes admirably to Whorf and Sapir‘s theory on linguistic determinism.