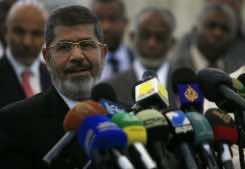 At least two of the new ministers are affiliated with Morsi’s Muslim Brotherhood movement, with the new appointments including the finance, oil and justice portfolios, the official MENA news agency reported.

Prime Minister Hisham Qandil, whose sacking the opposition demanded, headed with the new ministers to the presidential palace for a swearing in ceremony, MENA reported.

Qandil had said on Monday the reshuffle would comprise 11 new ministers, but his spokesman said he later agreed with Morsi to limit it to nine ministers.

Among the new ministers is a senior member of the Brotherhood’s Freedom and Justice Party, Amr Darrag, who will head the influential international cooperation ministry.

The investment ministry went to Yehya Hamed, another member of the FJP, according to the state-owned Al-Ahram newspaper.