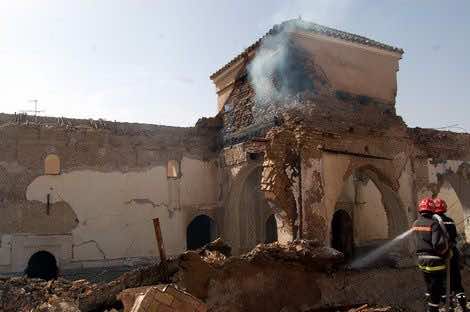 The great mosque of Taroudant, one of Morocco’s landmark monuments in the south, was burned to the ground on Tuesday morning.

The mosque, which was built 5 centuries ago, caught fire at around 5 am local time (4 am GMT), as a result of a short circuit.

The great mosque of Taroudant is one of the most ancient religious sites in Morocco. It dates to the time of the Saadian dynasty and was for centuries a place where the southern tribes swore allegiance to Morocco’s successive kings.

“The Great Mosque of Taroudant played a significant role at the scientific and political levels,” Noureddine Sadek, a historian who specializes in the history of southern Morocco, told news outlet Hespress.

“The mosque played a prominent role among the population of southern Morocco, and was for centuries a place where the tribes of the south swore allegiance to the Kings and a forum of reconciliation among the tribes,” he added.

Considered the largest mosque of the Saadian dynasty, which ruled Morocco from 1554 to 1659, the Great Mosque of Taroudant was renewed during the reign of Mohamed Sheikh Saadi in the middle of the 16th century.

The fire did not result in any human loss.