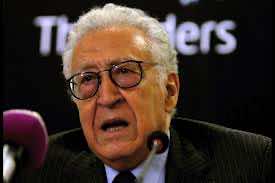 UN-Arab League envoy to Syria Lakhdar Brahimi on Wednesday “warmly welcomed” an agreement between the United States and Russia to pressure both sides in Syria to end the bloodshed, a statement from his office said.

“This is the first hopeful news concerning that unhappy country in a very long time,” it said. “The statements made in Moscow constitute a very significant first step forward. It is nevertheless only a first step.”

Brahimi had thought of resigning over the apparent absence of a political track to resolve the brutal civil war, a senior aide had told AFP.

“There is every reason to expect” backing for the accord from the remaining UN Security Council permanent members, the statement said.

“It is equally important that the entire region mobilises in the support of the process,” it added.

In Moscow talks which stretched late into Tuesday, US Secretary of State John Kerry met first for more than two hours with President Vladimir Putin and then for a further three with Foreign Minister Sergei Lavrov.

“We agreed that Russia and the United States will encourage both the Syria government and opposition groups to find a political solution,” Lavrov told reporters at a concluding news conference that ended after midnight.