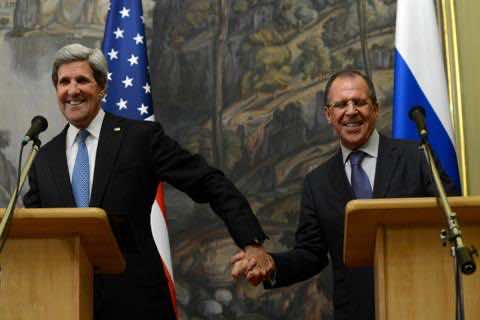 The European Union on Wednesday said it was “very satisfied” with a joint call from Russia and the United States for a peace conference on Syria.

“The EU is very satisfied…. The EU has repeated on many occasions that the solution of the conflict lies in a comprehensive political settlement,” Michael Mann, spokesman for EU foreign policy chief Catherine Ashton, told AFP.

“The EU would welcome any dialogue that would bring two sides to the negotiating table,” the spokesman added.

“It stands ready to assist in any way possible and hopes that the conference will be a beginning of a peace process.”

The decision to pressure both sides in Syria to end the bloodshed followed long talks in Moscow between US Secretary of State John Kerry and President Vladimir Putin, and then between Kerry and Foreign Minister Sergei Lavrov.

“We agreed that Russia and the United States will encourage both the Syria government and opposition groups to find a political solution,” Lavrov told reporters.