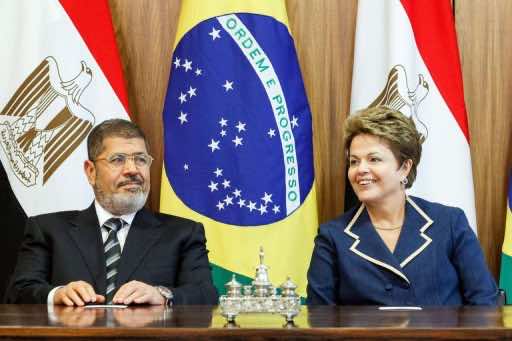 “We want more cooperation with Brazil,” Morsi told a press conference after two hours of wide-ranging talks with his Brazilian counterpart Dilma Rousseff.

“Brazil can provide a lot of support for Egypt’s development and social justice,” said the Egyptian leader, who is on a two-day visit to this key member of the BRICS group of emerging powers.

Morsi, who won elections last June promising to address the battered economy, has already visited the four other members of the BRICS bloc — Russia, India, China and South Africa — which he hopes Egypt can join.

“We decided to boost cooperation at all levels,” she added and offered to share Brazil’s broad experience in biofuel technology with Egypt, the biggest consumer market in the Arab world.

Brazilian officials note that from 2002 to 2012, bilateral trade grew sevenfold from $410 million to nearly $3 billion.

And Brazilian companies are particularly keen to invest in Egypt’s energy and transport infrastructure projects.

Rousseff said she and Morsi also discussed peace and security in the Middle East, with both sides agreeing on the need for the creation of a Palestinian state and for a peaceful solution to the Syria conflict with the support of the international community.

She said Brasilia also backed the establishment of a nuclear-free zone in the Middle East.

Thursday, Morsi was to meet with business leaders in Sao Paulo, Brazil’s economic and financial hub. The Sao Paulo region is also home to a majority of Brazil’s 12-million-strong Arab community.

Egypt’s foreign reserves have dropped by more than half to $13.5 billion since an uprising ousted president Hosni Mubarak in 2011, bringing in a period of increased lawlessness and political uncertainty.

Cairo has received several billion dollars in support from a number of countries, mostly Arab Gulf states, but is pinning its hopes on a $4.8-billion IMF loan it believes could grant much needed credibility among investors.

But the loan, which had been scheduled for last winter, was delayed when the Islamist Morsi faced a wave of political unrest, forcing him to defer economic reforms such as a tax increase that could have sparked further unrest.