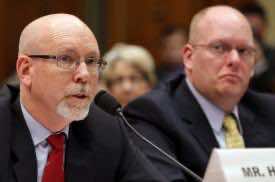 The White House on Tuesday accused Republicans of politicizing the attack on the US diplomatic post in Benghazi last year, as a high profile hearing into the episode went ahead in Congress.

Career diplomats told a House of Representatives committee that the US mission in Libya failed to meet crucial safety standards, possibly contributing the deaths of four Americans on September 11, 2012.

The White House argued that all the circumstances of the attack had been probed by a State Department Accountability Review Board and recommendations rising from identified shortcomings had been acted upon.

“This is a subject that has, from its beginning, been subject to attempts to politicize it by Republicans, when in fact what happened in Benghazi was a tragedy,” White House spokesman Jay Carney said.

“The president has been committed from day one to two things: making sure that those who are responsible for the deaths of four Americans are found and brought to justice and that we do everything we need to do to ensure that this kind of attack cannot happen again.”

Carney accused former Republican nominee Mitt Romney of using the Benghazi attack, which resulted in the deaths of US ambassador Chris Stevens and three other Americans, for political gain — and said his party was still doing so.

He said that he did not know whether President Barack Obama had seen coverage of the House Oversight Committee hearing, which riveted Washington, but said he doubted it, as he rarely watched television during the day.