By Hassan Benmehdi and Siham Ali 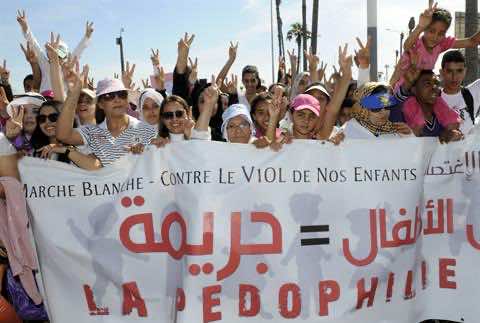 By Hassan Benmehdi and Siham Ali

Thousands of Moroccans on Sunday (May 5th) marched in Casablanca in support of a young victim of a brutal sexual assault that almost cost her life.

Ten-year-old Wiam Faraj was allegedly assaulted and raped last month by a middle-aged man in Ouled Othman, 60km from Sidi Kacem. The accused perpetrator was later arrested by gendarmes, according to Le Soir Echos.

Some 5,000 participants showed up to protest the attack, according to organisers.

“It’s useless to walk if nothing tangible is put in place afterwards to fight paedophilia,” noted rap singer Big.

The organisers hope to break the taboo of silence and pressure political decision makers to take the appropriate measures so that similar crimes never happen again.

Actress Amal Saqr pointed out that on her end, there was not just one Wiam, “but several, who are all victims not only of rape but victims of silence and society’s inaction as well”.

Marching alongside others, Wiam’s mother expressed her relief: “When I saw all these people coming to support my daughter’s cause, it really made me forget the pain.”

The White March, organised by the group Fikou (Wake Up), lasted three hours and covered nearly four kilometres of the avenues alongside the city’s corniche.

In accordance with article 475 of the penal code, rape in Morocco is punishable with several years of imprisonment unless the victim and her attacker get married. But the suicide in March of 2012 of Amina Filali, who was forced to marry the man who raped her, sent shockwaves through the country and requests to repeal the law started increasing.

The justice ministry announced in January that the government was in favour of removing the subparagraph that allows the rapist to marry his victim in order to avoid conviction.

The government is also moving to protect the rights of minors employed as maids. The long-awaited draft law on domestic work was finally adopted by the cabinet last Thursday.

There had long been calls to pass such a law governing the sector, in which many irregularities occur.

This crucial point is covered by the new law, which is intended to combat the employment of young girls under the age of 15 by making it a criminal offence.

Fines of between 25,000 and 30,000 dirhams will be imposed on those who employ children aged under 15 and those who employee minors aged between 15 and 18 without the prior consent of the guardian.

More generally, the law is intended to lay down the terms of the relationship between home help and their employers in order to give employees social security and socio-economic rights.

The law guarantees domestic employees a contract giving them several rights, including the right to at least 24 hours of time off each week. Monthly wages must not be less than 50% of the guaranteed minimum wage. After working for one year, employees will be entitled to redundancy pay.

“The regulation will enable a large segment of society to have access to decent working conditions in accordance with the provisions of the Constitution and the international agreements signed by Morocco in this field,” said Minister of Employment Abdelwahed Souhail.

The provisions of the law have been welcomed by domestic employees.

“What’s good about this law is that it bans the employment of children aged under 15, and that’s a big advantage, because there are families who exploit their children from the age of six onwards,” said Sbiha Cherrati, 28.

Sociologist Samira Kassimi said that this was a big step forwards for both child maids and domestic employees in general.

“Yet, it’s not enough to pass a law,” she remarked. “There needs to be monitoring to guarantee that the regulation will succeed.”