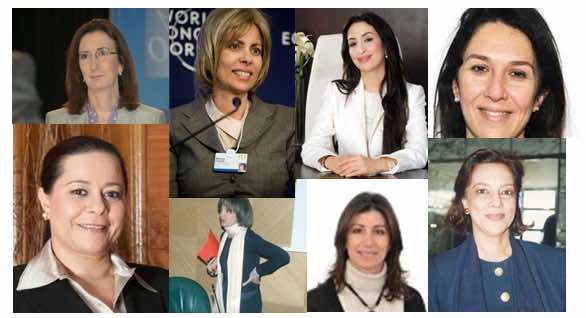 By
Larbi Arbaoui
-
Larbi is a freelance writer and assistant editor at Morocco World News.
May 8, 2013
Spread the love

Head of Akwa Group, a distributor of petroleum products, Salwa Akhannouch is a prominent Moroccan businesswoman who heads the franchise group Aksal, founded in 2004. Her ambitious project, Morocco Mall, is the largest shopping center of Africa and the Middle East and in the world top five. Her father, the famous Berber businessman Ahmed Haj Belfiqih, made his fortune in the tea trade. She is married to Aziz Akhannouch, Minister of Agriculture.

Current Associate Vice President of Holdings Group Safari-Sofipar Cofimar, Saida Karim Lamrani is managing and expanding the empire built by her father, Mohammed Karim Lamrani, who was the Prime Minister of the sixth government of Morocco since independence, under the reign of Hassan II.

Nezha Hayat is one of Morocco’s leading company directors and an avowed campaigner for women in business. Founder and deputy chair of the Association des Femmes Chefs d’Entreprises du Maroc, (Association of Women Business Managers in Morocco) Nezha is very attached to the presence of women on boards of directors, and the first woman member of the Executive Board in 2007 to Societe Generale Morocco.

Since1992, Nadia Kettani has been a Partner, Co-Manager and the Head of the International Consulting Department at Kettani Law Firm in Casablanca, one of Morocco’s oldest and most prestigious law firms. Kettani Law Firm’s project and corporate finance experts have been involved in advising the $1.6 billion financing of projects at the port of Jorf Lasfar.

After graduating from ESSEC Business School in Paris, Souad Benbachir joined CFG Group in 1995 as a Senior Associate and has been heading the Corporate Finance/M&A Department since 1999. She is Board Member of Risma, the Moroccan subsidiary of Accor, and head of the tourist T Capital Fund, and serves on the International Advisory Board of the French business school ESSEC.

An MBA graduate in International Managment and Finance from University of Dallas, Texas, USA, Meriem Bensalah Chaqroun was elected Wednesday, May 16, 2012 as President of the CGE M. She also directed for 23 years the mineral water companies Sidi Ali, Oulmes, and Bahia. She is the daughter of Abdelkader Bensalah, founder of the conglomerate Holmarcom.

A graduate of the Loréate Central School of Paris, Ghita Lahlou is the Executive Director of the group Omni-servicistes Saham. She is an alumna of the Royal holding ONA.

Amina Benkhadra is a Moroccan engineer and politician of the National Rally of Independents party. She was Minister of Energy, Mines, Water and Environment of Morocco in El Fassi’s government between 2007 and 2012. Currently, she is General Director of the National Office of Hydrocarbons and Mines.

Many of these brilliant women are heirs of great capitalists and daughters of powerful political families. The list published by the magazine, based on criteria of economic and financial influence and the decision-making role in large companies showed that the high success of most businesswomen in Africa still often rhyme with parentage or marriage.