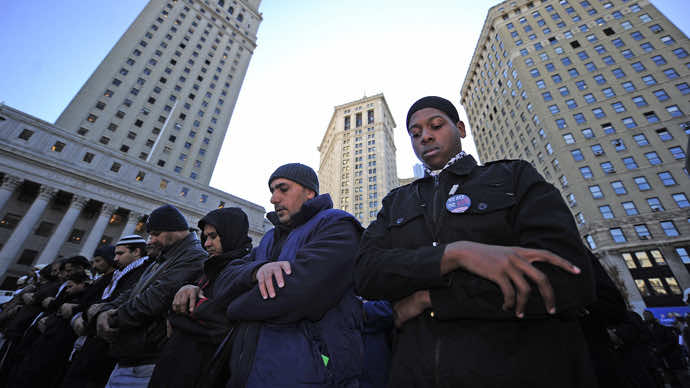 What would be your reaction if you realize that you are spied on and surveyed in every action everywhere you go? Would you feel that you are free? What is freedom of movement if it’s controlled and if the individual is constantly the subject of the panopticon principle? Wouldn’t you feel imprisoned however open the space you occupy if your behavior and movement are fully tracked?

After the 9/11 attacks on New York and the latest bombings in Boston, Muslims in the United States and particularly in New York City are being held defendants until their innocence is proved! Police officers and intelligence services in New York are allegedly keeping track of where Muslims get their hair done, where they buy groceries, where they entertain, where they worship and practice their religious rituals, or simply anywhere. Is this control over ever more private aspects of Muslims’ lives constitutional?

According to Daily News, the majority of New York City voters approve of the New York City Police Department’s (NYPD) Muslim surveillance and think that the NYPD has been effective in fighting terrorism. However, NYC comptroller John C. Liu said Sunday, May 5th, in a forum dedicated to Muslim and Arab American issues that surveillance of Muslim community groups is “unconstitutional,” distancing himself from the Democratic mayoral pack.

“No offense to you guys here – how can anybody think that it’s OK to survey or spy on people just because they’re Muslim?” said John C. Liu frankly and daringly. The former New York City Comptroller Bill Thompson strongly condemned the act of monitoring mosques, cafés, and bookstores in Muslim neighborhoods but he didn’t go that far to deem it “unconstitutional.”

At a time when Muslim communities in the USA are striving for more cultural understanding and religious and social rights, the act of surveillance and monitoring of Muslims would be regarded as a major step back and a regression in the US policy towards ethnic and religious minorities and cultural diversity of which the USA –the ‘melting-pot’ society- has long been proud of.